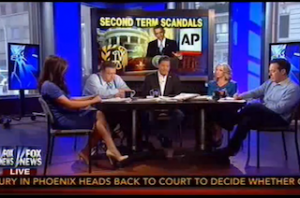 The hosts of Fox News’ The Five couldn’t quite believe their ears when they heard how tough Jon Stewart, Brian Williams and other members of the “mainstream media” have been on President Obama over the latest scandals surrounding the IRS and the AP. “When Brian Williams is talking Watergate and Jon Stewart stops covering for you,” Andrea Tantaros said, “things are not looking good at 1600 Pennsylvania avenue.”

“You didn’t just hallucinate,” Tantaros continued after playing clips from Williams’ NBC Nightly News broadcast and last night’s episode of The Daily Show. “I promise that really happened. And you know what? I want to congratulate the media today, and the comedians. Finally, they are seeing what we have been saying for years. Welcome to 2007.”

Eric Bolling urged the media to keep hammering Obama over these issues, with an eye on winning back seats for Republicans in 2014. “Keep reminding people,” he said, “because in the voting booth when people think about these scandals and go to vote in 2014, that’s the way to send the message that we’re not going to take any of this political elitism anymore.”

Dana Perino predicted that the media would be back on Obama’s side by next week. “They’ll all be coming back around and trying to help and saying, ‘Oh, how responsible, they called for a commission and everything’s going to be fine.'”

Perino then argued with Bob Beckel over whether Obama’s skills as a “fantastic communicator” would help him get out from under these scandals. Pointing to the administration’s communication failures on Benghazi and the IRS, Perino said, “just because he can say a sentence well, I don’t think that makes him a great communicator.”

Jumping into the fray, Tantaros said the only reason Obama is seen as a good communicator, especially during the 2012 campaign, is that “everything that he said, the media ran with. They printed every story. They didn’t print select stories and they carried his water so it was easy for him.” She added, “he was such a good campaigner, he wasn’t doing his job. And that’s the crux of every single one of these scandals.”