Finally! Todd Starnes Goes on a Fox Show That Doesn’t Let Him Get Away with Spewing Nonsense
video

Finally! Todd Starnes Goes on a Fox Show That Doesn’t Let Him Get Away with Spewing Nonsense 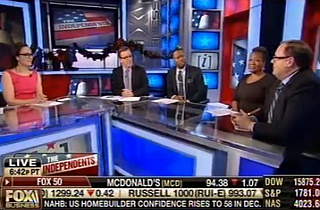 As the headline describes, this week Todd Starnes finally went on a Fox show that didn’t let him get away with spewing his histrionics on the “gay agenda” and a supposedly multi-front war on Christians in America. That show was FBN’s new libertarian talk show, The Independents.

If you’re unfamiliar with Starnes, he’s a Fox News radio commentator, one of our nominees for “Worst Media Twitter Account” of 2013, and the notorious type of social conservative who pals around with AFA’s Bryan Fischer and deflects all criticism of his obvious intolerance for homosexuality by labeling his opponents “brownshirts” and “anti-straight bigots.”

He also tends to go on Fox shows that welcome his views or coddle them with minimal pushback. In the past, he’s had a very adoring audience in Fox & Friends (complete with sirens blazing as his introduction to talking about the MUSLIMS coming for your children in public schools) and a comfortable space on Hannity’s primetime show.

But when he went on FBN’s libertarian talk show Tuesday evening, he was in much less friendly territory during a discussion on Russia’s anti-gay laws.

While he didn’t openly defend the Russian government’s criminalization of public homosexuality, Starnes instead attempted to drastically reframe the conversation around America’s own attempt to “crack down on the rights of Christian individuals.” The looks on the faces of panelist Jehmu Greene and hosts Kennedy, Matt Welch, and Kmele Foster were… priceless.

“I haven’t heard anything about that,” Foster said. “I’m not quite making the connection myself,” Kennedy agreed.

And when Starnes claimed the New Mexican baker being forced to make a wedding cake for a gay couple constituted the anti-Christian “crackdown,” Kennedy, et al, responded that libertarians have already condemned that. She then went on an awesome rant about how, in that situation, she is regrettably forced to defend a “bigot” and that she would just never buy from such a “lame” baker. You can sense Starnes getting ready to defend the baker’s anti-gay beliefs as not “bigoted,” but, sadly, the time ran out.

This wasn’t exactly a slam/blast/shout-fest/evisceration of Starnes, but that’s precisely why this segment was so noteworthy.

Think about it in the context of the thesis behind my Wednesday evening column on the Duck Dynasty patriarch’s suspension: Starnes looked absolutely goofy when put up against rational, thoughtful people who don’t want to simply silence him for his bigoted beliefs; instead they push back on him with a hefty dose of skepticism. We need more of that, and less of the hoping to silence every single anti-gay thinker in the public square.