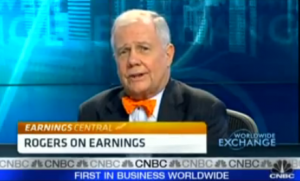 Financial commentator Jim Rogers was on CNBC Europe yesterday to discuss BP and the European stress tests. When the conversation turned to the tests, Rogers made it clear how little he thought of them, calling them a “total waste” and nothing but PR. More interesting though, was that, during his complaints about the subject, he basically indicted the very network he was on and implied it was nothing more than a PR agency. Cue quick (and awkward) save from the anchor.

Here’s how the conversation went down:

“CHRISTINE TAN: Has the European stress test on the banks made you more confident about owning the Euro?

ROGERS: Christine, the European stress test was a total waste. I mean, I know you have to talk about something on CNBC and in the press but that was a total waste. No, of course it has no influence on what I do with the Euro or anything else. That was just PR and little else.

ANNA EDWARDS: Jim, but the results of the stress test have been criticized for many quarters but we do have a great deal more transparency about these banks’ exposure to sovereign debt around the periphery of Europe for example. And, as a result, today, we’re seeing some of the banking stocks really climbing. Credit Agricole up by more than 8%, SocGen up by more than 8%, BNP also trading very strongly. There’s some relief out there that some of these French banks and others don’t have greater exposure to some of the peripheral European debt. So in that sense, could you say that the stress tests have proved to be successful?

ROGERS: Well, I said it was PR, Anna. They’ve got the stocks up. That’s the whole purpose of PR, make stocks go higher. That’s what CNBC and many many PR agencies are all about. Yes, they make things look better for a while. Are they really better? No.”

Ooh, that’s not the way to be a polite guest. Anna Edwards quickly tried to brush the accusation aside by calling Rogers “cheeky.” Ha ha, how cheeky he is! He besmirched the integrity of your entire news organization! Just like a rascally school boy, that one! I wonder if the producers had some choice words for Rogers once the segment ended…