Fiorina Fires Back at CNN Host: ‘I Can’t Believe We’re Having This Conversation’ 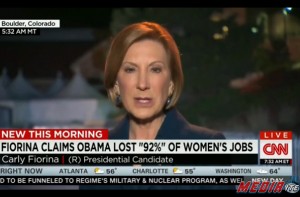 Carly Fiorina defended herself on CNN today against claims she used inaccurate information about President Obama during Wednesday’s debate.

In an interview on CNN’s New Day, host Alisyn Camerota asked Fiorina about her statement that “92 percent of the jobs lost during Barack Obama’s first term belonged to women,” citing an article by The Washington Post that fact-checked Fiorina’s numbers.

Fiorina pushed back at Camerota, telling the host that from her point of view, The Washington Post has “no credibility, honestly.”

“All the groups that progressives claim to be helping are being hurt in this Barack Obama term,” she added.

“Honestly, this has been hashed and rehashed. Is there no other issue of economic import to the middle class in the United States of America that you’d like to talk about this morning?” Fiorina asked.