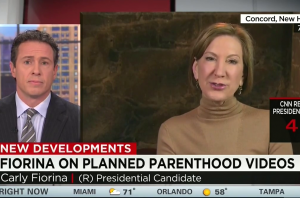 CNN’s Chris Cuomo and Republican presidential candidate Carly Fiorina got in a heated argument Friday morning after Cuomo said the Colorado Planned Parenthood shooter was influenced by her rhetoric.

“Do you feel any sense of regret about how you characterized what was going on at Planned Parenthood after the attack in Colorado?” Cuomo asked. “Because of what the man said which seems as though he was influenced by some of the rhetoric coming out of you and others that painted a very ugly picture and unfair one about Planned Parenthood.”

Fiorina was less than enthused about the question. “Oh, please. Really, Chris?” she asked.

“What happened in Colorado is a terrible thing, this guy is a deranged murderer, and I hope he is put away for life,” she said. “It may be that we should be classifying that as domestic terrorism as well. But that has nothing to do with the truth of what is going on in Planned Parenthood, and this is a typical left-wing tactic, to try and shut down the truth by silencing people.”

“The videos were edited, you know that,” Cuomo said.

“Actually, I don’t know that,” she insisted. “There’s been forensic evidence of those nine videotapes over and over again, there have been reports that say they are not edited.”

That led to a back-and-forth, where Fiorina eventually questioned Cuomo’s impartiality. “It’s clear what your opinion is, Chris… I think you’ve bought the Planned Parenthood line, hook, line and sinker. Good to know that.”

“I’m asking you if you feel that coming out of Colorado, it gave you any new sense of the power of rhetoric and what it can do, especially when it’s playing on a sensitive issue like abortion… this deranged man went out and killed in the name of saving the baby parts,” Cuomo insisted.

Fiorina shot back by listing off all the times Democrats had used heated rhetoric, such as when Barack Obama compared Republicans to Iranian hardliners shouting “Death to America” and said that they were helping ISIS recruit. “It is unconscionable to deride people who are conservative, their rhetoric, but not to acknowledge that the left uses incendiary rhetoric all the time.”

“It is not ‘objective’ to say that the left-wing does not try and shut down conversation that they don’t want to have by accusing people of inciting others,” she continued. “Remember Sarah Palin? Sarah Palin was somehow responsible for the attack on Gabby Giffords. It turned out that wasn’t true, either.”

“Well, I don’t know anything about what you’re saying about Sarah Palin,” Cuomo responded.