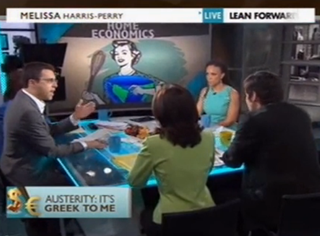 Usually in the business of chronicling cable news, a debate on austerity and inflation is a pretty hard sell. In a world of Jeremiah Wrights and Sandra Flukes, the Euro crisis is rather low on the personal drama scale. This morning’s Melissa Harris-Perry shattered that conventional wisdom, with The Washington Post‘s Ezra Klein and Reason‘s Nick Gillespie going head-to-head on the woes of the Eurozone and whether the nations should continue to spend money, the sort of crosstalk-laden panel discussion host Melissa Harris-Perry had to interrupt to remind them to keep the audience in the loop.

“Europe is in a bank run,” Klein began explaining, arguing that the central question in Europe is “if Greece goes down… does it spread?” Gillespie responded, noting particularly that “inflation is not a good thing,” a point Klein disputed as not being always true. Gillespie disagreed, calling the idea an economists’ dream that “just a little bit of inflation so our money is cheaper” will fix the economy, concluding “it never works out that way… inflation always goes out of control.”

The Nation‘s Katrina Vanden Heuvel jumped in then to declare that “austerity has failed” in her mind, as the world is “witnessing Britain which controls its own currency, and faring worse than the Great Depression; debt is a greater ratio of GDP than it was before the austerity programs.” This comment prompted some crosstalk on the matter, as Gillespie argued the problem with the UK was that they didn’t cut spending, not that they implemented an austerity program. Harris-Perry then jumped in to remind her guests that not all their viewers were that well-acquainted with the nuances of European economics– “we start saying ‘inflationary, margins’ and people just tune.”

The conversation continued, though, in the same vein: a debate on whether it was spending or taxing led Europe to the point it is today. Vanden Heuvel and Klein agreed almost completely that the problem with Europe is a lack of spending at a crucial time; Gillespie disagreed. “This is why Europe is in the toilet, because they have an unrealistic and unsustainable economic model where they’re going to keep spending and keep taxing,” he argued, a point Klein called “not quite right,” arguing that more spending– which European countries had not done to the extent required in his view– would help. Despite being a fairly heated ten minutes over a topic that rarely gets a turn at being dramatic on cable news, it ended on a conciliatory note, with Victoria Defrancesco Soto concluding, “austerity is needed, but to a certain extent.”

The panel got feisty at times to the point of palpable frustration around the table, but that’s what made today’s episode of the program fly by: the feeling that there was so much ideological diversity around the table about every single topic that they could all snap at any given time about a European nation’s GDP or very difficult and salient economic issues in the way viewers would typically expect panelists to go at it over a cultural or social issue. It’s about as entertaining and powerful an argument for avoiding panels of people who all think alike to the best extent possible as there can be.