Firing Brazile Is a Start, But CNN Needs to Launch Full Investigation Into Leaks 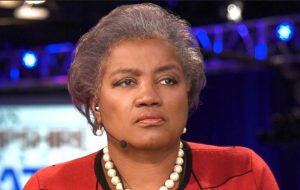 CNN recently made the wise decision to cut ties with commentator Donna Brazile after a series of hacked emails released by WikiLeaks indicated that on at least two occasions, Brazile fed questions in advance of CNN events to the Hillary Clinton campaign.

In a March 12 email, Brazile told Clinton about a death penalty question that she was going to be asked at a CNN town hall. After a second email emerged Monday showing Brazile also tipped off Clinton to a question from a Flint resident ahead of the March 6 CNN Democratic primary debate, a spokesman announced that Brazile had been fired (oh, excuse me: she “resigned”).

The decision to cut ties was something of a no-brainer; Brazile was damaging the brand and wasn’t even appearing on the network in order to serve as head of the DNC. Now that she’s gone, I’m sure CNN brass would love to consider this story essentially over and move on.

But I believe that would be a mistake. The best way forward for CNN would be to launch a full, independent investigation of how Brazile even managed to get the questions in the first place, to ensure nothing similar could ever happen again.

CNN has been adamant that they had nothing to do with the leaking of questions, that they never even gave Brazile questions, and that their questions never even existed in email form. “To be perfectly clear, we have never, ever given a town hall question to anyone beforehand,” they told Mediaite when the story first broke. Additional statements with each new development have never wavered on that point: “CNN never gave Brazile access to any questions, prep material, attendee list, background information or meetings in advance of a town hall or debate,” a spokesman said Monday.

When the town hall questions leaked, they pointed fingers at their partner TVOne and host Roland Martin. They noted (convincingly, in my opinion) that Brazile sent the email to the campaign the day before internal emails show TVOne gave the same question to CNN’s Jake Tapper, meaning it was unlikely anyone at CNN was the source.

…But TVOne and Martin didn’t partner with CNN for the March 6 debate. On background, a CNN source told Mediaite that they believe Brazile learned about that question at a CNN charitable drive handing free water to the residents of Flint. Per the CNN source, Brazile was seen speaking to the woman at the event, and could have learned about the question from the horse’s mouth.

That’s basically impossible to verify (although we do have proof that the water hand-out event definitely happened). But the official story appears to be that we have two instances a week apart where a CNN commentator learned the questions to a CNN-hosted debate, but in both cases the source for the question was from outside CNN. That might be true, but the network has to realize that many will find that hard to swallow.

There was a second email released Monday that was also suggestive. After leaking the town hall question, Brazile promised to send along more questions: “I’ll send a few more. Though some questions Roland submitted”: 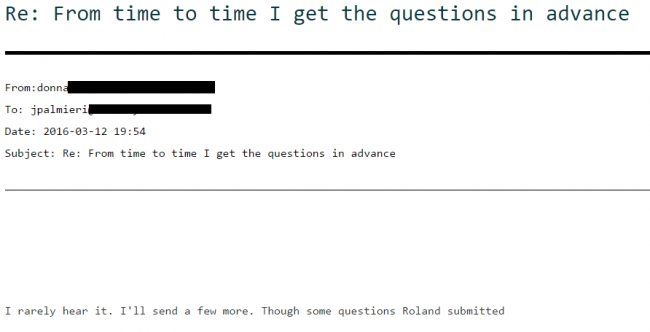 It’s that last sentence that interests me. I’ll admit it’s vague: at first, I took it to mean Brazile was warning the Clinton campaign that Martin was submitting some questions, so she didn’t know those. I’ve since noticed others are taking it to mean that she was warning the campaign that some of the questions she was providing were from Martin. On balance, I think the second interpretation is more likely.

But regardless of which interpretation you favor, either one indicates that not all the questions she had access to were drafted by Martin. After all, if “some” of the questions she sent were from him, then at least some weren’t. That of course leaves open the question of who provided the other questions.

(Likewise, it’s worth noting Brazile’s headline: “From time to time I get questions in advance.” That implies there’s some degree of regularity to her receiving questions, not that this was a one-off occurrence as CNN would suggest.)

I’m of course reading a lot into a five-word sentence fragment in a one-paragraph email that may be obsolete after the next Wikileaks dump. But as anyone in the journalism world can tell you, it never hurts to check your sources. If CNN is indeed telling the truth, an independent review would be nothing but a good thing, exonerating them in the public eye.

The alternative is that every future debate CNN holds will have a pall cast over it. Should the next Bernie Sanders or Donald Trump falter in the debate, they’ll regale supporters with tales of the time a CNN employee leaked questions to the establishment candidate. How then, they’ll argue, can we trust that no questions were leaked ahead of this debate?

Really, they’ll have a point. When journalists and pundits jump to CNN’s defense, they’ll cite vague reports four years earlier of what an unnamed source at CNN thinks might have been Brazile’s source for the question. As it currently stands, the only basis for trusting the integrity of future CNN debates is CNN’s word, and not much else.

If this really was all a freak coincidence and bad behavior from one of CNN’s partners, the best way to ensure public trust in future debates is an independent verification of the underlying facts. As a media organization themselves, I have no doubt CNN would agree that daylight is always the best policy.