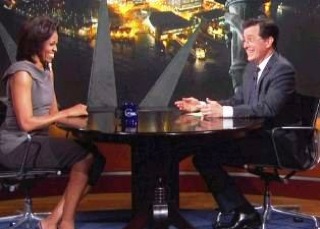 Stephen Colbert had a difficult task at hand for his interview today– First Lady Michelle Obama, who came prepared to speak to the “First Gentleman of Colbert Nation” about her new project with Dr. Jill Biden, Joining Forces, dedicated to aiding military families and helping veterans find work and readjust to civilian society. Needless to say, Colbert was on his best behavior.

Well, somewhat best. For one, he opened the interview by taking full credit for the 2008 election results. “The last time you were here you were not First Lady, and now you are,” he explained, “that’s called the Colbert bump.” The First Lady laughed, and explained her project– veterans, she explained, where some of the most “highly trained, highly skilled, most competitive people… the best of America,” and they “benefit the bottom line of companies” as employees. Colbert expressed some discomfort with the government sticking a hand in the economy and employment, and the First Lady replied that she understood such concerns– “government has a role to play, but it can’t do everything.” Colbert also interjected with some suggestions for why veterans make the best employees, like “with the stories he tells of his previous job, he will really make the inter-office complaining sound trivial.” She agreed: “it’s hard to be a whiner around a veteran!”

Colbert also hit First Lady Obama with some of his patented hard-hitting questions– for example, “as someone who has both appeared on my show and iCarly, which of us has more gravitas?” The First Lady couldn’t answer. “iCarly is about sixteen, and she’s real deep,” she replied. “I should add some random dancing to my show,” Colbert replied, thinking aloud.

In the second half of the interview, First Lady Obama explained why she chose veterans as her initiative, as opposed to any other potential project. “The thing that struck me is that they do it with grace, they do it without complaint,” she noted, and considered that many, like her family, “we are not a part of the military community, so we do not understand that sacrifice.” Colbert objected: “I served in Iraq for almost a week [for USO], so I consider myself a veteran.”

Colbert concluded asking the First Lady whether she ever teased President Obama with the fact that she was more popular than he was. She laughed, but declined. Bottom line? “He’s my man.”

The full interview via Comedy Central below: