First Lady Michelle Obama Tells BET Audience She Has No ‘Fashion Regrets,’ But… 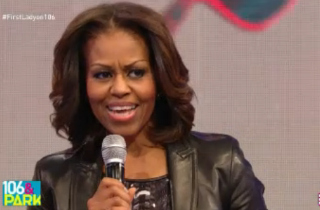 First Lady Michelle Obama, the FLOTUS with the Mostest, gave a lengthy interview in an appearance on Black Entertainment Television’s 106 & Park on Tuesday, and among the revelations that Mrs. Obama made were details of her first date with now-President Obama, and that she has no “fashion regrets.”

The First Lady did, however, express some consternation at other peoples’ reaction to her attire, a reaction that caused her to abandon one particular sartorial item.

During Mrs. Obama’s appearance on 106 & Park, cohosts Bow Wow and Keshia Chante asked her about a variety of topics, many related to the First Lady’s Let’s Move fitness initiative, but also some more fun, personal topics. It was on just such a topic that Mrs. Obama revealed a lingering disappointment.

Reaching into the “Bowl of Randomness” for an audience question, Mrs. Obama read, “What’s your biggest fashion regret?”

“Oh, that’s a tough one. Wow, biggest fashion regret,” she said, stumped. “I don’t have an answer to this one. I kind of always am happy with what I’m wearing.”

“And you have to be comfortable when you fly,” interjected Bow Wow.

“So I have avoided shorts getting off of Air Force One,” the First Lady revealed.

What’s interesting is that the “stink” that the First Lady described didn’t come from the usual suspects in the conservative media, but from the likes of The Washington Post, whose fashion critic called the shorts , and NBC News’ The Today Show, who ran a segment asking “Is it appropriate for the president’s wife to wear shorts?”

Later in the interview, Mrs. Obama also quickly decided that she’s a better dancer than the President, and described their first date in some detail. Asked to describe a presidential pick-up line, the First Lady replied, “Oh my goodness. It wasn’t a line, it was a whole day. Our first date, he laid it out. I mean, he covered every base. He took me to an art museum. And then he was talking Picasso. So he showed me his little cultural side and then we went for a long walk and we went to see the opening of Do the Right Thing — Spike Lee — so he showed me his swag side. We had a deep conversation about that and we ended it having drinks on the top of the John Hancock Building in Chicago.”