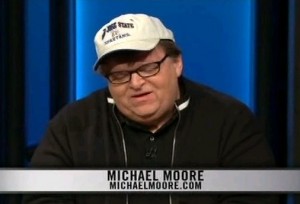 On the season finale of Real Time, the liberal dynamic duo of Bill Maher and Michael Moore were still really angry about the midterm election results, and did not in any way share President Obama’s humbled reaction.  In fact, it was hard to tell if they were angrier at the voters or with the President.  Not only did Maher lash out at voters for being simple dogs and Moore imply voters would only react positively to lies or catchy marketing, but Moore hoped Obama would quit blaming Bush for everything and demanded Obama start being more aggressive.

Moore’s crowd-pleasing appeal to the President was to “please take off your pink tutu because it’s time to put on the boxing gloves and go fighting for the people.”  One really has to sympathize with the President these days, as it seems he cannot win friends anywhere.  If he moves to the center and compromises with Republicans, then he’s an impotent ballerina in the eyes of some, but if he passionately fights for his principles, then he’s a radical socialist in the eyes of others.  Maybe dancing in India is the only thing Obama can do these days that will not anger someone, or maybe not.

With the close of Maher’s show for the season, viewers always have to appreciate the host’s willingness to criticize both political parties and his eagerness to have genuine debate.  If there was a theme to summarize this season (or maybe Maher’s entire act as of late) it is that the American people are too uninformed to know what is good for them.  This is ultimately such an ironic message for Maher who seems genuinely disappointed with the Obama presidency, and so it is unclear why Maher cannot respect the Tea Party movement and other independent Americans who, most of the time, have been informed and motivated by their own equal disappointment with the current administration.  We shall see if Maher’s tune changes when he returns to the air January 14, 2011.

The video from HBO’s Real Time below: