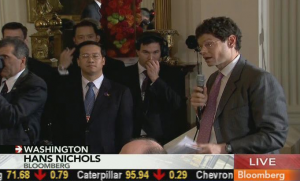 If you’re a news geek like us, and you actually watched yesterday’s joint news conference at the White House with President Obama and Hu Jintao of China, you already know who Hans Nichols is. If you’ve got a real job of some sort and can’t be watching news conferences, maybe you heard how one reporter pinned down President Hu for seeming to dodge a question on human rights. That was Hans Nichols.

For journalists, it was a great moment–and many went to Twitter to praise Nichols for holding Jintao’s feet to the fire. In this morning’s Washington Post, Dana Milbank describes the moment:

The next questioner, Bloomberg’s Hans Nichols, gave Hu a lesson in press freedoms. “First off, my colleague asked you a question about human rights which you did not answer,” the lanky newsman advised the Chinese strongman. “I was wondering if we could get an answer to that question.”

In Beijing, that impertinence would get a reporter jailed. But Hu wasn’t in Beijing. During the translation of Nichols’s question, Hu held a palm up and smiled, as if he couldn’t see what all the fuss was about. “Because of the technical translation and interpretation problem, I did not hear the question about the human rights,” he explained – falsely, as it turns out.

It was a good moment for the American press.

So who is this Hans Nichols? 5QQ caught up with Nichols after yesterday’s star turn at the White House newser, and asked him five questions. Turns out he’s not just gutsy and smart, but pretty funny, too.

1. When you stood up in front of the President and President Hu, and noted that Hu had failed to answer the question on human rights, Twitter lit up with attaboys. How was that moment for you?

Really, I am supposed to check Twitter in a presidential press conference? And if I did, would I cop to it. Twitter is for two types of people: Those who can be witty without being insulting (pace, Lizzie O’Leary) and the unemployed. I don’t wish to be unemployed.

In all seriousness (and this is your only serious answer), any reporter is more focused on getting the quotes right for a potential follow-up.

Plenty of reporters — and many in that room — are smarter.

3. You covered the McCain/Palin campaign, and have interviewed both the President and Sarah Palin. Much has been written about how Obama and Palin are different, but how are they alike?

Not sure if I remember an exclusive Palin interview to be honest, but I’ll take credit for one. Ditto President Obama, but if Gibbs is reading, ahem, it’s about time. And go with the young kid, not the colonel. He’s dangerous. (Actually, go with JG.)

But Obama and Palin… Dunno, maybe they share the same view on natural law or something. But both are basketball players. Both hopped around in college. Are they both left-handed? Not sure. Seem to remember some picture of Palin shooting free-throws with her left hand, but maybe she broke her good hand.

4. How do you stay grounded and in touch with reality when you report inside the journo-bubble at the White House?

I play basketball with Cillizza once a week. Oh, and occasionally squash with a few cabinet secretaries, but that’s it.

5. Finally, and you knew we wouldn’t let this pass, right? You got some ribbing from Jon Stewart in a Daily Show bit during the Obama transition:

Did you hate it? Love it? Does it give you street cred on the White House beat?

I always intended to send him a thank you note in Arabic, written in classic calligraphy. Make Stewart translate it. But then I got into a tiff with my tailor and he was really the best Arabic-speaker I knew at the time. Beautiful penmanship. And I couldn’t very well ask him to draft an ornate, flowery, flowing letter when we were involved in some minor dispute. Unseemly. We’re speaking again, so maybe it’s not too late.