FLASHBACK: Joe Biden Calls for Impeaching Bush If He Attacks Without Congressional Approval 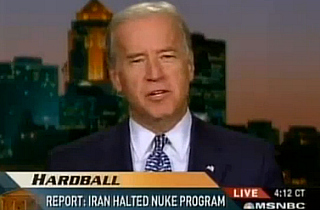 It seems imminent that President Obama will authorize a strike against Syria in response to the regime’s alleged use of chemical weapons on its own citizens outside Damascus. Approaching Congress for a vote on such authorization, however, does not seem to be in the cards. This stands in stark contrast to how both President Obama and Vice President Joe Biden spoke about unauthorized military strikes when they did not occupy the White House.

Critics of Syrian intervention have noted that, back in 2007, the president declared in writing that “The President does not have power under the Constitution to unilaterally authorize a military attack in a situation that does not involve stopping an actual or imminent threat to the nation.” He was referring to a hypothetical (but, at the time, seemingly likely) situation of the Bush administration striking Iran over its potential nuclear weapons development.

But thanks to cable television and the archival power of the Internet, we are now also reminded that VP Biden took that authoritative and correct view a step further, declaring it an impeachable offense for the president to strike another country without prior consent from Congress.

In a December 2007 interview with MSNBC’s Chris Matthews, Biden reiterated his prior comments on the “impeachable” matter and put it all quite bluntly [emphasis added]:

“The reason I made the comment was as a warning. I don’t say those things lightly, Chris. you’ve known me for a long time. I was Chairman of the Judiciary Committee for 17 years. I teach separation of powers in constitutional law. This is something I know. So I brought a group of constitutional scholars together to write a piece that I’m going to deliver to the whole United States Senate pointing out that the president has no constitutional authority to take this country to war against a country of 70 million people unless we’re attacked or unless there is proof that we are about to be attacked. And if he does, I would move to impeach him. The House obviously has to do that, but I would lead an effort to impeach him.”

Despite the administration and some of its boosters’ best efforts to paint the potential strike as solely a “humanitarian” mission; one that will clearly not lead to a foreign policy quagmire on par with Iraq; this Syrian intervention does constitute a strike on another country — an action which, by constitutional definition, requires congressional authorization. Yet neither Biden nor Obama seem to be moving a single toe towards Capitol Hill.

Watch that Biden clip from 2007 below, via MSNBC: