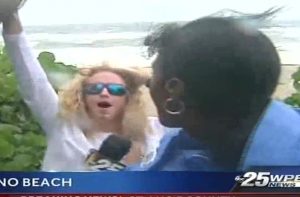 A local West Palm Beach news station’s live weather coverage of Hurricane Matthew was interrupted by a young man who urged viewers to take out and display their genitals for Harambe, the gorilla shot and killed by zookeepers in Cincinnati.

Florida is already facing heavy rain and winds from the Category Four storm, and the White House has declared a state of emergency in the Sunshine State. But despite Governor Rick Scott’s pleas for people to evacuate and stay sheltered, a few revelers decided to go to the beach to take pictures.

“We think we have a little indication as to who those guys are if they are out in this storm,” snarked an anchor in response.

Watch above, via WPBF.