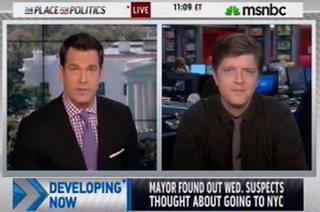 Former CIA officer and correspondent for The Blaze, Buck Sexton, told MSNBC anchor Thomas Roberts that politicians suggesting that American security agencies like the FBI or the Department of Homeland Security could have prevented the attack on Boston last week are incorrect. He said that it would have been impossible or even illegal to surveil the suspects based on the paucity of credible information about the threat the Tsarnaev brothers represented prior to their attack on the Boston Marathon.

Sexton said there are legitimate and operational reasons why agencies may not share intelligence, as well as the more parochial reasons like turf protection.

Roberts asked if the administration’s critics, like Sen. Lindsey Graham (R-SC), were correct in suggesting that the red flags raised by Tamerlan Tsarnaev’s visit to Russia and Moscow’s warnings about his increasing radicalization meant that the U.S. could have prevented the attack on Boston.

“I’m not so sure,” Sexton replied. “I wouldn’t be as hard on law enforcement as he tends to be right now based on the information we have.”

Sexton said it was “concerning” that Tsarnaev’s travels to Chechnya did not result in added scrutiny by American security agencies, it was not necessarily damning.

“There’s only so many things that they can do based on the information they had,” Sexton added. “There are all kinds of information coming in about individuals who have traveled to areas of concern. They can’t surveil everybody and, quite honestly, it would be illegal to surveil everybody.”