Fmr. Democratic Rep. Rocks The RNC, Appeals To Independents And Democrats To Correct Mistake Of 2008 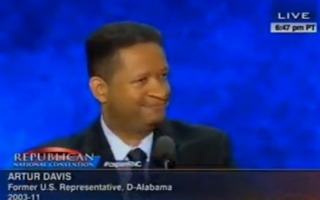 Former Democratic Alabama Rep. Artur Davis, who introduced President Barack Obama in 2008 at the Democratic Convention in Denver, appeared before the Republicans in Tampa on Monday and fired up the crowd with a powerful speech. He said that he regretted his vote and spoke directly to the nation’s independents and Democrats who do not support Obama anymore. “May it be said of this time in our history, 2008 to 2012: mistake corrected,” said Davis.

Davis opened by thanking Republicans for letting him addresses their convention as a former Democrat. He slammed President Obama and said that the nation that elected him was blinded by his ability to speak and their hopes that the nation would move forward under his leadership.

He went on to say that he was depressed by how Obama has performed in office. It did not take long before he had the audience eating out of the palm of his hand as he ramped up the rhetoric of a former Obama supporter.

“Now, ladies and gentlemen, there are Americans who are listening to this speech right now who hasn’t always been with you,” said Davis. “To those Democrats and independents whose minds are open to argument, listen closely to the Democratic party that will gather in Charlotte and ask yourself if you hear your voice in the clamor. Ask yourself if these Democrats still speak for you.

“When they say, ‘We have a duty to grow government even when we cannot afford it,’ does it sound like compassion to you or does it sound like recklessness,” Davis continued. “When you hear the party that glorified Occupy Wall Street blast success, when you hear them minimize the genius of the men and women who make jobs out of nothing, is that what you teach your children about work?”

“When they tell you America is this unequal place, where the powerful trample on the powerless, does that sound like the country your children or your spouse risked their lives for in Iraq or Afghanistan,” Davis continued. “Do you even recognize the America they are talking about?”

“John Kennedy asked us what we can do for America. This Democratic party asks what can government give you,” Davis went on, attacking Obama’s changes welfare reform’s work requirements. He concluded by expressing his hopes that the nation sends Mitt Romney to the White House next year.

Watch Davis’ speech below via C-SPAN: