Fmr. Deputy Asst. Secretary Of Defense On Leon Panetta: His Comments On Bin Laden Are ‘Careless’ 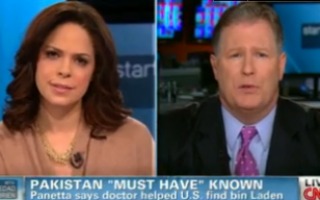 You’ll recall that Panetta told 60 Minutes that, while he does not have hard evidence that Pakistan knew Osama bin Laden had been essentially hiding in plain sight within a suburban Pakistani compound, “I personally have always felt that somebody must have had some sense of what was happening at this compound.”

“I don’t know what purpose it served at all in revealing that or saying that now, you know, so many months later,” said Brookes. “I think U.S.-Pakistani relations are in a terrible state. I’m not sure they could go any lower other than a complete break in the relationship. So I’m not sure what point it really served for him to say that on national television. ”

“I concur with Secretary Panetta, but I’m not sure,” he added.” I think it was a mistake to go ahead and say this once again to a national audience when we’re trying to – once – you know, we you’ve got to remember, Soledad, that the supply routes through Pakistan are still closed, that we want them to deal with the Haqqani Network and the Taliban and al Qaeda that’s growing in the tribal areas of Pakistan. We want their help with Afghanistan. So I’m not sure why saying this now would have been at all helpful. I think by diplomacy is probably what’s needed.”