Fmr. Press Secretary Gibbs Admits He Was Told ‘Not To Acknowledge’ That Drone Warfare ‘Exists’ 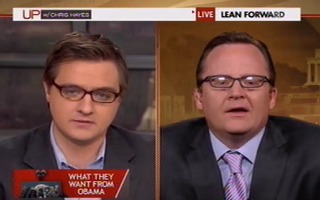 Joining MSNBC’s Chris Hayes on Sunday morning’s Up, former White House Press Secretary Robert Gibbs admitted that he was told by members of Barack Obama’s administration “not to admit” that a drone warfare program exists. Gibbs shocked MSNBC’s panel guests by the admission that Obama was already focused on hiding the drone program from the press even before he took office in 2009.

Hayes asked if the White House was “sufficiently forthcoming” with information about the drone warfare program.

Gibbs replied that President Obama has acknowledged the need for the White House to be more forthcoming than they already have been with information about the drone warfare program overseas. However, he said that there are some aspects of the program that must remain classified.

“When I went through the process of becoming press secretary, one of the first things they told me was ‘you’re not even to acknowledge the drone program,” Gibbs said. “You’re not even to discuss that it exists.”

“Here’s what’s inherently crazy about that proposition: you’re being asked a question based on reporting of a program that exists, right? So, you’re the official government spokesperson acting as if the entire program – pay no attention to the man behind the curtain,” Gibbs added. He said that the continued denials that the program existed when it had become undeniable undermined voters’ confidence in the administration.

The MSNBC panel guests were surprised by Gibbs’ admission. Columnist for the U.K. Guardian, Ana Marie Cox, said that it was surprising that the Obama transition team in 2008 was already focused on obscuring the details of the drone warfare program. “An interesting statement about what the priorities were for the administration,” Cox said.

Center for American Progress President and CEO, Neera Tanden, said that the White House was in a tough position regarding drone warfare. She concluded, however, that Gibbs had a good point about how not being forthcoming could make voters cynical about the nature of transparency in the government.