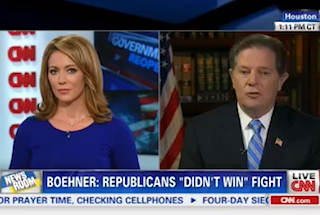 DeLay began by admitting Republicans “did lose” the fight over the budget and the debt ceiling. Echoing the words of House Speaker John Boehner (R-OH), he said, “They put up a good fight. O appreciate everyone that voted against the deal yesterday and stood up and fought. Unfortunately, they didn’t have enough votes to carry out the fight and win.”

When Baldwin brought up Republicans’ crumbling approval ratings, Delay accused her of pushing a “media narrative” with those numbers. “I have no narrative, sir,” she responded. “I’m just right in the middle, just asking the question.”

“I’m not attacking you, Brooke,” DeLay assured her, “but we saw how the media completely trashed Ted Cruz and others, trying to fight for what their people believe in.” He said despite the GOP’s effective loss, “out here in the real world, outside of New York and Washington, D.C., these people think Ted Cruz is a hero. They think that those Republicans in the House are heroes. And they think that Obama is destroying this country.”

Asked to elaborate on his criticism of Obama, DeLay referred to him as “arrogant-in-chief.” He added that the statement Obama delivered this morning was the “height of arrogance and incompetent. The president is incompetent with Obamacare. He can’t even roll out Obamacare. “He’s incompetent by enforcing on this country something that they don’t want. He’s incompetent in his foreign policy. He’s just an incompetent president.”

DeLay predicted that America will see more action from the tea party wing of the Republican Party over the next 90 days when the next round of budget and debt ceiling battles will take place. “Republicans should regroup and come out fighting and be on offense, and not be on defense.” he said. Extending the football metaphor, he added, “They need to develop a game plan, getting ready for January and February’s fight.”