Fmr. SEAL Team 6 Member on Williams’ Embed Story: ‘None of It Can Be True’
VIDEO

Fmr. SEAL Team 6 Member on Williams’ Embed Story: ‘None of It Can Be True’ 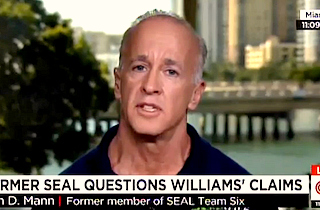 Former SEAL Team Six member Don Mann told CNN’s Brian Stelter that Brian Williams’ story about being embedded on a Seal Team Six mission and later receiving a piece of fuselage from the mission as a gift was all but impossible.

“What Brian Williams is saying, none of it can be true,” Mann said on Reliable Sources Sunday morn. “For a reporter to be embedded with SEAL Team Six or any Tier One unit — that just doesn’t happen. …The objective of any Tier One unit is to conceal. …The last thing in the world we would want is a reporter sitting in a helicopter embedded in one of these units.”

Mann said that for a member to have retrieved a piece of a downed helicopter from battle would have entailed an insane amount of risk in the midst of a battle. “In the midst of all that a Seal would have to go back in and grab a piece of that tail,” Mann said. “There’s not way in the world that would happen. It would be criminal.”

Mann added that there were occasional instances of STS members having given mementos to presidents or CIA directors, but generally sounded as though he wanted to throw all reporters out of a chopper. “A reporter’s objective is in contrast to the military’s,” Mann said. “A reporter wants to expose everything that we’re trying to conceal.”