Fmr. Texas GOP Head: SCOTUS Can’t Make It OK for Men to ‘Penetrate’ Each Other
VIDEO

Fmr. Texas GOP Head: SCOTUS Can’t Make It OK for Men to ‘Penetrate’ Each Other 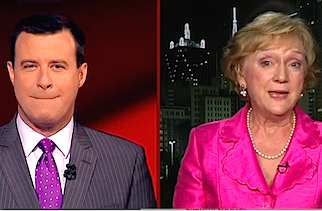 As the Supreme Court prepares to deliver a ruling on same-sex marriage rights before the end of the month, Cathie Adams, former chair of the Texas Republican Party, visited Al Jazeera America this week to share her opposition to all things LGBT. And at one point, anchor David Shuster had to physically hold back his laughter when Adams responded to his question with one of her own about man-on-man “penetration.”

Instead of answering that question, Adams surprised Shuster by asking in return, “Do you think that a man’s body is meant for penetration by another man or is a man’s body meant to be in union with a woman whose body is built for that behavior?”

After pointing out that she did not exactly answer his question, Shuster asked again if she would abide by a Supreme Court ruling. This time, Adams replied, “I am not going to throw away the scriptures, the millennia of history, in order to accept the judicial fiat of a few judges.”

“We’ll take that as a ‘no,'” Shuster said, before ending the interview.

In her refusal to accept the pending Supreme Court ruling if it does go her way, Adams is following the lead of presidential candidates like Mike Huckabee and Ben Carson, who have both suggested in recent weeks that they would ignore the implications of the decision if elected president.

Watch video below, via AJAM: