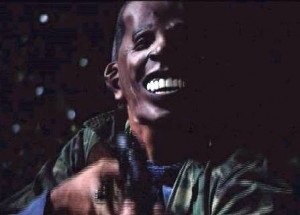 It’s weird that this is happening on HBO and not Comedy Central. Think about it. With president heads starring in TV shows, it seems like we’re just one step closer to the world of Futurama.

The Obama masks showed up in a scene on this Sunday’s True Blood. In the series, a gang of rednecks have been driving around shooting at people who are “different,” in this case a family of shape-shifters. The bigoted thugs wear the Obama masks in what I suppose is their attempt at a very subtle satirical point, much like the incredibly subtle satirical points that make up the rest of True Blood.

Deadline got a quote from an HBO spokesperson who said that this was “a complete and utter coincidence and one show has nothing to do with the other.”

That’s too bad. I hope this HBO trend continues. Maybe in a few months George W. Bush can show up on Treme.

Wait, I take that back. Werewolves and dragons are one thing, but President Bush getting involved in New Orleans post-Katrina is just too ridiculous.

Watch the clip from HBO below. Be warned, it, y’know, features a family getting shot at by a bunch of thugs in Obama masks. So, yeah.