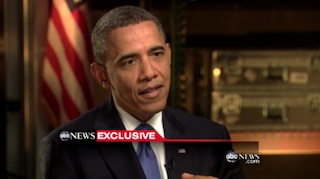 In an interview with Diane Sawyer airing tonight, President Obama laughed off Jan Brewer’s claims that he with aggressive with her, joking that he’s “usually accused of not being intense enough” and pointing out that it’s always good for a Republican to tell people they fought with him. However, there was one accusation that he didn’t seem ready to laugh down and that was Newt Gingrich’s “food stamp president” insult.

After telling Sawyer that he hasn’t watched the Republican debates (sigh, what a lucky guy), she brought up Gingrich’s comment and Obama was quick to respond:

“First of all, I don’t put people on food stamps. People become eligible for food stamps. Second of all, the initial expansion of food-stamp eligibility happened under my Republican predecessor, not under me. Number three, when you have a disastrous economic crash that results in 8 million people losing their jobs, more people are going to need more support from government.”

Obama didn’t, however, want to get into the beliefs of some that Gingrich’s comment and others of its kind was racially tinged.

Sawyer brought up complaints by some constituents who were wondering why all his work on jobs hadn’t come sooner and he disagreed with the notion that they hadn’t, telling her that “we’ve done a lot in three years” before talking up the auto industry. She asked him if he had any regrets and he admitted that of course he’d made mistakes (“Look, I make a mistake every hour, every day”), but that it was a learning position.

Damn, Mr. President! What are you thinking admitting to being human during a campaign year! RNC, get your sound bites here.

The full interview will air tonight on ABC World News. Watch a clip of it below: