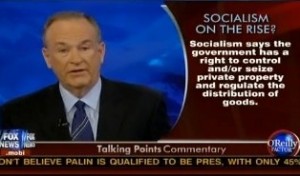 On last night’s O’Reilly Factor, the “Talking Points Memo” was all about socialism in America today, which was followed by an interview between host Bill O’Reilly and conservative radio host Laura Ingraham. During the back in forth, O’Reilly revealed that he himself did not “think President Obama was a socialist”; a comment which rang hollow given the previous five minutes of his program were dedicated to “socialism” in America under this administration. Turns out that no other cable news channel discusses socialism more than Fox News, and its not really close.

By using the television database TVEyes (a content partner of Mediaite’s) we searched how many times the words “socialist’ and “socialism” were used on-air in the last three months. Since this database is comprised of close-captioned transcripts created by human transcribers, it isn’t perfect. Still the results are instructive.

Not surprisingly Fox News leads the pack with 468 total mentions of “socialism” or “socialist.” MSNBC comes in second, totally 266, and CNN a paltry third place at 94 total mentions. A significant, though not exponential difference, until you consider the vast difference in ratings. If one considers that Fox News prime time often triples the average viewers of its rivals, one should amplify this difference by a factor of three.

A good example of that narrative is best expressed by O’Reilly’s talking points memo last night:

For a guy that doesn’t think that Obama is a socialist, O’Reilly provides a lot of airtime dedicated to the fear of socialism in our country. Turns out that this is not an anomaly — no other cable news channel discusses the concept of socialism more than Fox News, and its not really even close.

During his much ballyhooed appearance on The Factor, Jon Stewart was asked what he made of a recent poll that declared Fox News as the must trusted name in news. Stewart said that they were the most passionate and delivered the clearest narrative. Part of that narrative is that though he may not himself be a socialist, Barack Obama‘s administration is advocating a socialist agenda that includes redistribution of wealth, government intervention with banks, health care and basically anything else they can get their hands on.

Of course, none of this is news — its opinion. FNC has been clear in drawing a clear line between their opinion and news programming – and the later has been just as dominant over its peers as the opinion shows. As Roger Ailes told Arianna Huffington during This Week, Fox News IS the most trusted name in news.

But there is a reason we pointed out back in last September, that Mr. Ailes is the most powerful political person in America. As Stewart mentioned, no other network has as passionate and consistent delivery of a singular new narrative than Fox News. Perhaps that’s why they are so popular. And powerful.

But I leave it to the best current media critic to sum this up for me, in Jon Stewart’s pushing back on this very issue with Bill O’Reilly: