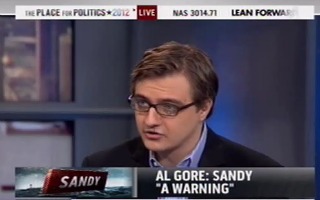 After comparing the challenge posed by climate change to the Civil War, and opposition to carbon taxing to antebellum slave traders, MSNBC host Chris Hayes has now taken to comparing the impact of Hurricane Sandy and its aftermath – which he links to climate change – to the steroid scandal in Major League Baseball. In fact, climate change, like happiness, is anything and everything at all – so long as it advances a regulatory framework that curtails Western capitalism.

MSNBC anchor Thomas Roberts introduced Hayes as a “strong advocate for the debate on climate change,” and he is that so long as the debate ends in his preferred conclusion. Hayes went on to say that Hurricane Sandy’s unprecedented impact on the Northeast and Midwest is evidence that climate events are increasing in frequency and severity.

“People will say, ‘Well, there were bad storms in the 1930s,’ and indeed there were,” Hayes said. However, Hayes noted – somewhat contemptuously — that the present impact of climate change can be “tricky” to understand. To aid in the process of comprehension for his audience, he dumbed down climate change to an easily digestible analogy: climate change is like steroids in baseball.

“If a baseball player is on steroids, you can’t point to any one home run and say ‘that home run was because of steroids,’” Hayes said. “But if you look over the course of the year and they hit 60 homers where they used to hit 35, you know that something is up.”

“Every single metric we have is telling us that climate change isn’t some abstraction in the future we need to worry about and prepare for — it is happening now,” said Hayes. He advocated for a “radical,” “crash program” to reduce carbon in the atmosphere, and to readjust the paradigm for average Americans so that everyone understands that Hurricane Sandy-like events are no longer the exception but the norm.

“30 years from now, we will look back at on the silence of this issue with horror,” Hayes said, employing his standard moderation. “It will seem inconceivable to the next generation that we sat by and let this happen without our political system dealing with it.”

No doubt, Hayes views storms like Sandy with real terror. He is earnest in his belief that catastrophe looms unless industrial capitalism is curtailed. When pressed, Hayes would likely nod in China’s direction and concede that they must also reduce their carbon emissions. That Chinese industrial pollution does not dominate Hayes concerns about the future of climate change betrays myopic fixation on Western capitalism and a lack of seriousness about the challenge that he suggests climate change poses.

If this was a truly global crisis, as Hayes claims, why does he not advocate for a truly global solution (rather than the watered down, U.S.-first-and-foremost strategy that was advanced in Kyoto and, later, Rio)? Why can the United States “lead from behind” on pressing and immediate matters relating to international security policy, but the U.S. must set an example for the world when it comes to climate change?