For Stargate, a More Universal Appeal

For Stargate, a More Universal Appeal 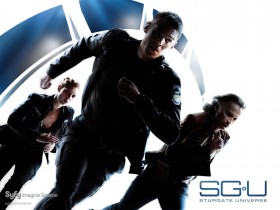 Stargate likely the most successful sci-fi franchise you’ve never seen. Tonight, you might want to consider changing that.

That’s because tonight is the premiere of Stargate Universe, the much-anticipated and hotly-promoted new show from SyFy. You may already know that Stargate Universe is coming — the recently-rebranded network has thrown a lot of weight behind the show, clearly hoping to win over fans searching for a replacement for their beloved Battlestar and sorely missed Stargates SG1 and Atlantis, and who have not been getting their robots-aliens-and-explosions fix from the somewhat lighter fare of Eureka and Warehouse 13.

With Battlestar gone (sort of), Doctor Who and Torchwood both on semi-hiatus for the year (and David Tennant about to regenerate out of the role), and with the sinking of Stargate Atlantis, we are now facing a definite starship deficit. The crib death of Battlestar creator Ron Moore’s follow up FOX series Virtuality, the all but certain cancellation of ABC’s  Defying Gravity (think “Grey’s Anatomy in Space”), and the rampant production problems on ABC’s upcoming “oh, redoing any bad ’80s sci-fi series is clearly going to work” V remake make it plain that network tv still doesn’t get how to do big scale sci-fi right.

But tonight, SyFy is promising to bring back the starships, bigtime.  And that is cause for excitement, because even with the cuter, fuzzier SyFy label, this is the network that knows how to do this genre.  BattleStargate (as people should and will be calling it, if they are not already) is coming.

Stargate Has Been Here for a While, You May Have Just Missed It

Here’s what you may not know: the Stargate franchise, which originated in the high concept 1994 Roland Emmerich (Independence Day, Godzilla, The Day After Tomorrow) film of the same name, has already seen more than its share of success on TV.  In fact, Stargate SG1, the property’s first TV incarnation, ran for ten seasons on two networks (not counting a concurrent franchise deal that made it seem like the series was pretty much everywhere all the time), making it the longest-running US sci-fi show of all time.

Add the spin-off’s spin-off, Stargate Atlantis, which began its five-season run concurrently with SG1’s eighth, and between the two closely intertwined shows you have 314 hours of fun, grand, often self-consciously campy hard sci-fi TV.  And that doesn’t even take into account the two direct-to-video spin-off-off-off films that have been made on the back of the franchise, and the at least two more that are forthcoming.

The Stargate universe represents one of the most complete, complex and cohesive efforts in sci-fi worldbuilding.  In the TV realm, only the cumulative weight of the various Star Trek franchises, and perhaps the unintentionally campy Babylon 5, can compare.  So SGU will have broad shoulders to stand on as it launches tonight, even as it tries to distance itself from them.

If you’ve never seen the movie, or caught an episode of SG1 or Atlantis on Showtime or SyFy, or in syndication on Fox or in various other places, here are the basics:  It’s now, we’re us.  Deep inside Cheyenne Mountain, a secret branch of the military operates a big circular device called a Stargate (discovered in Egypt in the 1920s) that can link up with other similar gates on other worlds, allowing instantaneous one-way travel.  Plus there are aliens, and space ships, and enemies and allies. And we have a base in another galaxy, called Atlantis (don’t ask).  And this all goes on behind the backs of most of the Earth’s population.  Out in the galaxy we are a force to be reckoned with, but that doesn’t mean that the government wants the folks at home to know.