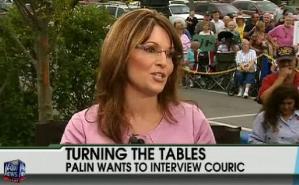 Will Sarah Palin get to put her journalism degree to use in the near future?

In a Fox & Friends interview this morning, she joked about wanting to interview Katie Couric. We found out what CBS thinks of that idea.

Gretchen Carlson interviewed Palin in Florida earlier this week – making it five Fox News hosts who have interviewed the bestselling author – and part two of the interview aired today. There was a lightning round of questions, including this from Carlson: “Chances you’ll ever grant Katie Couric another interview?”

“I would like to interview her,” said Palin. “I’d like to know if she’s learned anything yet about Alaska. I want to know if she understands yet what we have to contribute up there in the state of Alaska.”

Well CBS might call her bluff. CBS News & Sports President Sean McManus tells Mediaite, “I will huddle with Katie on Monday and see if we’ll accept that offer.” We have a feeling that may be tongue-in-cheek, but that would make for some great TV – or maybe an upcoming tables-turned @KatieCouric.

Carlson also asked Palin the chances she’d run in 2012 with Glenn Beck? “I got a kick out of it, he probably thought it was just a hoot, too. I don’t know, we’ll see we’ll see,”

She also hinted at starting another party – the Common Sense Conservative party, if “the Republican party doesn’t get their act together.” Sounds a little like something another disenchanted Fox News host might like to get behind.

Here’s the interview that aired this morning:

• Note: We interviewed McManus about CBS News’ upcoming series, “Where America Stands.” That story is coming next week…