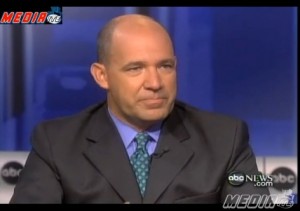 On ABC’s This Week this morning, former Bush strategist and This Week fill-in host Matthew Dowd made an analogy so comically bad, it rivals the Vatican’s “Priests-as-persecuted-Jews” narrative (for which they’ve just apologized). Jake Tapper asked Dowd, as one of two Catholics on the panel, to weigh in on the newest child sex abuse scandal that reaches all the way to the Pope.

Dowd’s response was to say that, from a PR standpoint, the Vatican has handled this worse than Toyota handled the Prius recall. In cold, practical terms, it’s not so outrageous, but it belies a disgraceful collective denial on the part of everyone involved.

Dowd is doubtless correct that there are a ton of good priests, and they should be looking for a new employer.

I’m sure I’m not the first to make this observation, but if Chuck E. Cheese‘s had been caught, just once, transferring pedophile employees to other locations, would anyone be talking about the PR consequences? Now, imagine the 4,392nd such instance went all the way up to Mr. Cheese himself.

Such a scenario would never occur, and not just because the chain would immediately dissolve. No matter how much people like the pizza, air hockey, animatronic jam bands, and video games, after awhile, people would stop bringing their children there! Now, as the product of a long line of Irish Catholics, I understand that salvation from Hell is some pretty powerful pizza, but is it worth damning thousands of children (and their children’s children) to hell on Earth?

Honestly, it boggles my mind that there’s still a Catholic church to be the Pope of. Fool me once, shame on you. Fool me several thousand times, while abusing children, well, you get the idea. Maybe this is a case where the language surrounding the crime plays a part, too. Some call it a “priest sex scandal,” as if these guys were lounging on heart-shaped beds, pitching woo to the strains of an Al Green record.

Even the term “child sex abuse” doesn’t really properly convey the horror. If the media had reported on the “Catholic Child Rape” scandals for the last 30 years, maybe things would be different. Sure, they weren’t all technically rapes, but that’s a defense I would love to hear someone make.

I understand the nature of faith, and its power. Jesus said “blessed are they that have not seen, and yet have believed.” He said nothing about those who have seen a mountain of grim, evil evidence to the contrary.

There are lots of places where a kid can be a kid. If you must seek salvation at any cost, drop your kids off at a Chuck E. Cheese’s, or at any church that doesn’t ruin children’s lives, on the way.

Update: Speaking of horrible comparisons, my old Politics Daily pal Melinda Henneberger offers up this doozy in defense of her continued membership:

Nevertheless, there I am and there I will stay. Why? Well, to return to the world of politics for a comparison, say you were a lifelong Democrat who had learned that those running the D.N.C. had betrayed your trust in just about every way you could think of. You’d be angry, yes, and I wouldn’t want to be the poor guy trying to get you to open your wallet for the next cycle. But would their perfidy turn you into a Republican? No, you’d keep right on living life as a Democrat because that’s who you are. In the end, it is not about them.

This relies on the notion that the only alternative to Catholicism is the exact opposite of Catholicism. It’s like saying you can either be a Catholic, or a Satanist.

In fact, current events belie the comparison as well, as Republicans who feel betrayed by the RNC are finding lots of other ways to support their candidates.

There are probably lots of reasons to remain a Catholic, or no reason at all. In America, you don’t need one. But to act like it’s the only game in town is just more denial. When the leader of an organization betrays you, there’s always a better place to go. At least, that’s been my experience.