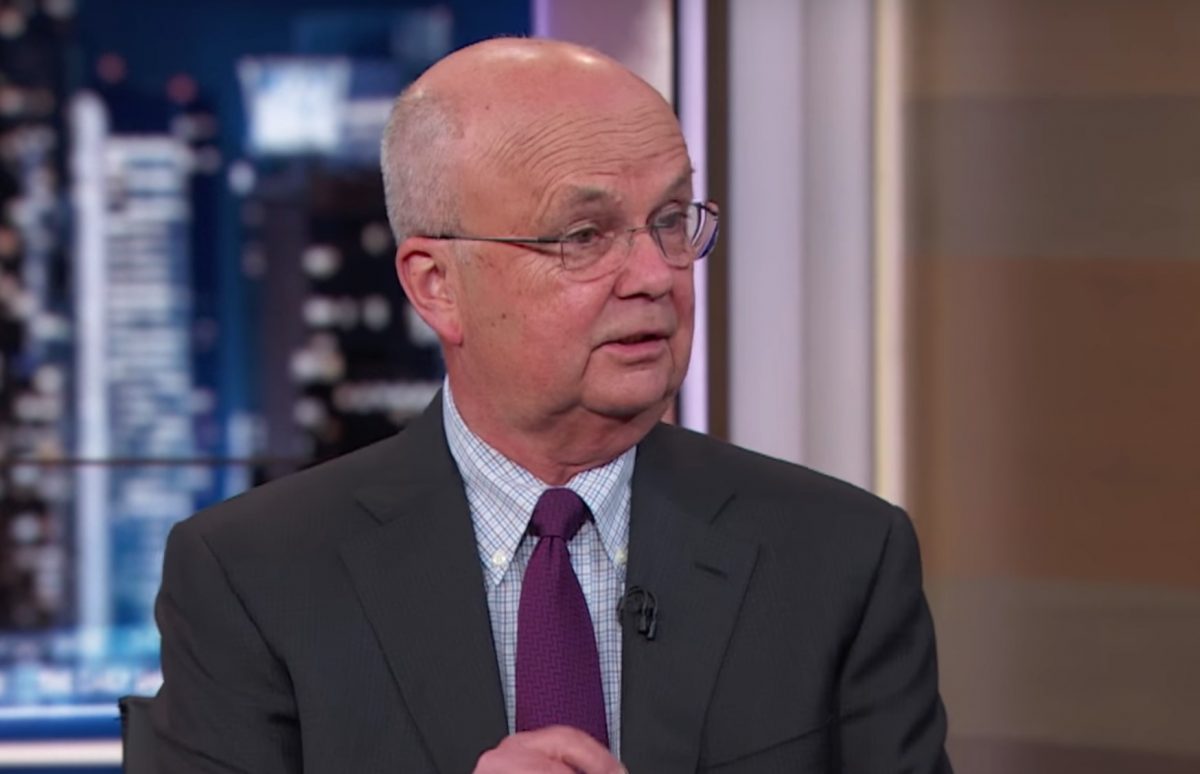 Yesterday, after the utterly insane and historic joint press conference between President Donald Trump and Russian President Vladimir Putin, I interviewed General Michael Hayden, who was the Director of the CIA under Presidents George W. Bush and Barack Obama. The conversation was about twenty-five minutes long, and here is a lighted-edited transcript of the discussion.

John Ziegler:                          General Michael Hayden, former director of the CIA and author of the new book The Assault on Intelligence, thanks so much for joining me. I’m quite sure that you saw the joint press conference between President Trump and Vladimir Putin. Obviously, it’s not too often that we can just ask what’s your reaction, but why don’t we just start with that?

Gen. Hayden:                        For the first 80% of it, if I had to score it I would say Putin was ahead on points. There were no knockdowns. There were no cuts above the eye. I was preparing my thoughts to say tonight it was okay. I was fearful about the summit, but I think there’s some positive things here. Then we got this nuclear denotation at the end that blew all those judgements away because of a very difficult, hot and insightful from an American newsman that he tossed at both presidents about what the Russians did during the 2016 campaign and elections. At that point I think it’s fair to describe that for President Trump, in my view, all the wheels began to fly off, John.

Gen. Hayden:                        It was pretty high. I’ve seen some folks from what I would call my tribe already tweet about impeachment and so on. I’ve not done that, John. It’s a serious political question for us as a nation, and the way to change presidents isn’t through extraordinary measures, it’s the vote, and vote in the next regularly scheduled election. John, it’s a little bit out of my lane, but I’ll offer you the view that if President Trump is removed through any of these extraordinary methods a good one-third of my countrymen will view that to have been a coup, and that’s not good for America. I am content to let the truth continue to come out, and let the truth take us where it will.

Gen. Hayden:                        Look, I know John deeply believes what he says. I do myself, I try, anyway John, to be what I call the fact witness. I do have some experience in intelligence, and I think experience adds value, so I try to confine my comments to those things that I know something about. I would not say what John says, how John says it, but I do get the urgency in what’s behind the things that he tweets.

Gen. Hayden:                        I think the core question was, “Who do you believe, your intelligence community or Vladimir Putin?” The president said, “Well, there are two views. They’re both held by good people,” and then, “Frankly, I don’t know why the Russians would have done that.” So, clearly, the President made it obvious that he was bending in the direction of Putin’s denial rather than the intelligence community and now law enforcement’s community strong belief that the Russians did this… Then, the other thing that was really off-putting and a bit scary is that the President began to throw things into the air to obfuscate the question and confuse his audience back here. He brought up Hillary Clinton’s emails that have nothing to do with this, the DNC server, and then some Pakistani IT professional, and I still don’t know what he was talking about there, all designed to obfuscate, to cloud in the face of what was a remarkably detailed indictment last Friday from the special counsel’s office.

Gen. Hayden:                        Putin was specifically asked whether he had kompromat on Trump, never answered that question either, John. He said, “Well, when he came to Moscow I didn’t even know who he was,” which is different than saying the intelligence services did do some homework on him.

Gen. Hayden:                        That’s a great question, and I’m going to answer it, but not quite answer it, John. If I gave you an answer that would be viewed as a judgment on the people currently serving, and I know how tough these jobs are, and it’s not fair for me to do that. That said, I’m going to talk a little bit about what you asked. I don’t think it applies to folks, say, like Gina Haspel. Gina is the head of CIA. She’s a career intelligence professional. She’s going to go tend to the blocking and tackling at CIA. Dan Coats, Senator Coats, a noble guy who has actually been quite upstanding in his commitment to the truth since he’s taken the job. Now, Director Coats has got to make up his mind as to whether or not, in the face of what just happened, is it a greater service to the nation to stay or to leave.

Ziegler:                                      I know you have, and I have struggled with this throughout this entire investigation as to why it is that it certainly appears that Donald Trump is in some way beholden to Vladimir Putin. I have tried very, very hard to not succumb to these conspiracy type theories or these dramatic theories of Trump being some sort of a Russian asset, or the idea that they have some sort of leverage over him. But I have to tell you, General Hayden, after watching what we saw today it is really difficult for me to not conclude that there is something very large that we are unaware of. What do you make of that type of reaction?

Gen. Hayden:                        I was an attaché in a communist country in the 1980s in Bulgaria, John. When I got there my predecessor and I were driving around. It’s a hostile environment, so you need to be careful. He says to me, “Let me give you a piece of advice I’ve learned over the last couple of years here, Mike.” He said, “You’re going to have a much happier assignment here if you never attribute to malice that which can be equally explained by ignorance.” I’ve kind of held that up the way I think you are in what you just said. But, John, the longer this goes the less inclined I am to attribute this to ignorance or naiveté or lack of knowledge because it’s so consistent, so pervasive and today so stark, and, frankly, so serious in its consequence. I’m like you, I’ve got no evidence, but it’s harder and harder to pass this off as ignorance or some sort of personality quirk.

Gen. Hayden:                        I wouldn’t immediately go to compromised, but there might be something in the history, maybe even something, John, lord, what do I know about these kinds of things, in the president’s own personality that makes him unable to see what is obvious to everyone else. Look, back to my being a fact witness, I don’t want to jump to conclusions. If I ever get to that conclusion, and I may never get there, but if I ever get there I want most Americans to believe that I got there reluctantly, not enthusiastically, but I got there painfully and not reflexively. I’m going to be slow to get to that place.

Gen. Hayden:                        Actually, the book kind of foreshadows today’s news conference in that I think we as a society have moved into a kind of post-truth era in which a lot of Americans are making decisions less based on facts, data, evidence and more on feeling, emotions, preference, grievance, loyalty, tribe. We’ve got a president who, as a candidate and now as president, has brilliantly exploited that. Then we’ve got a foreign power, the Russians, who have recognized the first and second dynamics, and are exploiting them and taking advantage of them for their own advantage.

It all comes back, John, it all comes back to the disregard of objective reality, the disregard of truth. You saw it today at that press conference where the President rejected more data than you and I will ever see about the Russian meddling and interference in the 2016 election, and equated it and actually put his thumb on the scale on the side of Vladimir Putin who simply said, “It didn’t happen.” That’s what I mean by non-data based decision making, the eclipse of truth, the movement into a post-truth world. That’s kind of the center line of the book around which everything is organized.

Gen. Hayden:                        John, to be fair, I’m, from time to time now, the darling of the liberal media, okay? (chuckles) Actually, I didn’t do any promotion of the book on Fox, except Fox radio with Brian Kilmeade who’s a very good friend. I’ve just not been exposed to those media outlets. I’ve just got to be candid. I still view myself as modestly to the right of center in American politics, kind of a conservative internationalist, all right? I do think an awful lot of American media, Fox News, the alt-right media, certainly, most of talk radio has moved away from conservatism and in the direction of raw populism, which is very different from conservatism. I think that’s at the expense of the values of American conservatism that I think we all thought we once shared.

Gen. Hayden:                        If the book had been favorable to Trump, sure. They definitely would be. Look, there’s still good folks on Fox. Dana Perino is one, Shepard Smith is another, Bret Baier, who are straight news people, but an awful lot of Fox now, frankly, have become, I think, advocacy general. Now, to be fair to everyone here, they’re not the only network with that problem. Each now has kind of staked out a position where you can broadly kind of expect what kind of treatment you’re going to get with regard to the day’s news. What I recommend to folks is to be as eclectic as possible in choosing your news stories, otherwise they’ll become ghettoized and reinforced in their beliefs when they actually should be challenged.