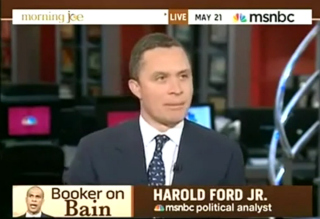 In what may come as a surprise to some, former Democratic Congressman Harold Ford, Jr., took to MSNBC’s Morning Joe on Monday morning to defend Newark Mayor Cory Booker‘s comments criticizing President Obama’s campaign for demonizing private equity. “I agree with [Booker], private equity’s not a bad thing. As a matter of fact, private equity is a good thing in many, many instances,” Ford told the Morning Joe panel.

As you may recall, Booker told NBC’s David Gregory on Sunday that the president’s attack on Romney’s background in private equity is “nauseating to the American public. Enough is enough. Stop attacking private equity. Stop attacking Jeremiah Wright.” Later in the day, Booker walked back that statement in a personal YouTube video. But former Congressman Ford says he would not have done so:

But Ford did add that he understands why Booker may have felt the need to retract his aggressive statement a bit, adding that “I understand as a surrogate for the campaign, you have to have one of your key and most eloquent and most effective surrogates at least clarify or at least bring context to his statements.”

It may come to surprise many that Ford, a former Democratic congressman from Tenneessee, would defend private equity so vociferously. But following his political career, Ford did go on to work for Merrill Lynch, Bank of America, and Morgan Stanley. Furthermore, Ford has been one of those rare, laudable Democrats to consistently defend the free market, so much so that he landed a speaking gig at the libertarian Cato Institute’s 2008 Milton Friedman Prize Dinner.