Former Derrick Bell Student Sally Kohn To Hannity: ‘You And I Have Hugged, That Doesn’t Mean We Agree!’
video

Former Derrick Bell Student Sally Kohn To Hannity: ‘You And I Have Hugged, That Doesn’t Mean We Agree!’ 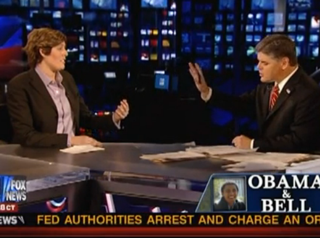 As host of the program to debut the full tape of President Obama hugging Harvard Law Professor Derrick Bell, Sean Hannity has been at the forefront of the attack on the President for his association with a professor he considers radical. On his program last night, he had Erik Rush— who broke the Jeremiah Wright story– argue the point that a pattern had emerged, and on his left Sally Kohn, who had been Bell’s student and argued that hugging someone doesn’t mean all their opinions transfer to you.

“It’s safe to assume this is much ado about hugging,” Kohn argued, which Hannity refused vehemently, arguing instead that it was about President Obama telling America to “open your heart and mind to what he said.” As far as his radicalism as a law professor, Kohn noted that President Obama’s syllabus had both “the Fugitive Slave Act and Robert Bork‘s critique of civil rights legislation.” Hannity did not see this as relevant, instead proposing a hypothetical in which one of the Republican candidates was associated with someone who had said “I live to harass black folk,” as Bell had said “I live to harass white folk.” As for Farrakhan, Kohn agreed he was “anti-Semitic” but didn’t think Bell should be deemed racist “for wanting to talk about race in America.”

Rush agreed with Hannity. “There are certain things that aren’t acceptable,” he noted, and that much of what Bell said fell into that category. “You can’t embrace people like that and not expect people to take notice.” Kohn finished with a final argument against the hug being a relevant bit of information, reminding Hannity, “You and I have hugged, that doesn’t mean we agree on everything!”