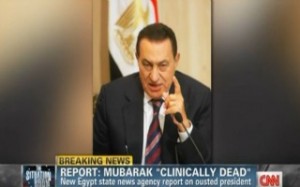 Deposed former Egyptian President Hosni Mubarak has been declared ‘clinically dead’ after he suffered a massive stroke and was placed on a respirator after his heart stopped according to a report from the state-run MENA news agnecy. Mubarak was removed from prison, according to the nation’s Interior Ministry, after his stroke on Tuesday. The ousted leader was taken to a Cairo hospital where he is likely to soon be taken off life support, though CNN reports efforts were being made to “keep Mubarak alive.”

The 84-year-old Mubarak was sentenced to life in prison for his role in attacks on protesters during the 2011 Arab Spring. CNN reported on Tuesday afternoon that they were receiving reports from the Middle East that Mubarak was “clinically dead,” but they have been unable to independently confirm those reports.

Mubarak’s clinical death comes amid massive protests in Egypt following a decision by the nation’s highest court invalidate a recent parliamentary election. Those protests escalated after the weekend’s presidential election in which a candidate with the formerly banned Muslim Brotherhood won the country’s executive post.

Egypt’s generals dissolved parliament and claimed legislative power for themselves last week following the court’s decision to invalidate parliamentary elections. Some have described the move as a military coup.

The nation has been rocked by protests and reports of mob violence after the weekend’s elections. The stage is now set for a political fight against the ruling military and the popularly elected Muslim Brotherhood.

Watch the announcement via CNN: