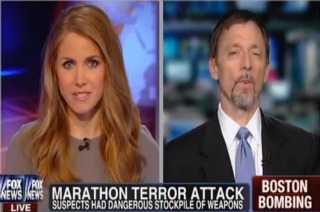 Former FBI special agent and adjunct professor at Georgetown University, Christopher Voss, joined Fox News Channel anchor Jenna Lee on Monday to discuss whether or not Dzhokhar Tsarnaev, the Boston bombing suspect, should be read his Miranda rights prior to interrogation. Voss repeatedly said that the debate over whether or not to extend Tsarnaev his Miranda rights was irrelevant to the interrogation because interviewers more often seek to establish a friendly relationship with the subject of an interrogation.

“How does whether or not the suspect is read his Miranda rights influence or impact your investigation?” Lee asked.

“Well, it really becomes irrelevant,” Voss replied. He said that interrogators tend not to be aggressive when attempting to extract intelligence from a suspect, but they will more often try to strike a rapport with the suspect.

“Really?” Lee asked. “Because we’re hearing that it’s such a major obstacle of whether we get to the bottom of this investigation.”

Voss said that the interrogators look to establish a relationship with the target of an interrogation because that is the most effective way to extract intelligence. “Miranda – it’s much ado about nothing, in my view,” Voss concluded.