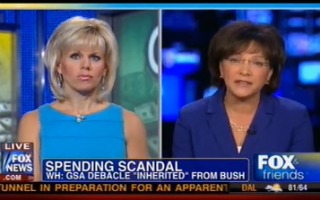 Fox & Friends co-host Gretchen Carlson spoke with former GSA administrator Lurita Doan Monday morning, asking her about the White House’s claims that it inherited the GSA’s issues from the Bush administration in light of a recently-released video showing GSA employees calling attention to the agency’s frivolous and excessive spending.

Carlson asked Doan to speak a bit about the criticism of her performance while at the agency as well as why, if President Obama’s administration knew about mismanagement at the GSA 11 months ago, nothing was done about it until recently.

I think this is very typical of the Obama administration. There’s a lot of misdirection and cherry picking of information that they released to the public. I think you also see the Obama administration circling their wagons because they know this is very damaging. You simply cannot justify the kind of wasteful spending but and especially to have TSA and federal employees talkING about wasting the taxpayers’ money. But I think the more important issue here is that the GSA public voting service which had this conference and which was rewarding employees to talk about wasteful spending in a series of videos, they’re the agency that manages the public buildings of the federal government and the stimulus and infrastructure projects for the President. And so you have to call into question, if this is how they’re misusing taxpayer money, what else are they doing with the $787 billion of the stimulus? Because we know that the stimulus did not achieve the desired results and we know that the shovel-ready projects did not exist and this is the division within GSA that handles that.

Carlson shared a statement from the White House stating that “At least we have taken bold, swift, forceful action to hold those responsible accountable and put in place protections to make sure this never happened again… If Bush administration folks had acted under their watch, the 2010 debacle could have been avoided.” Carlson compared this to reprimanding children by focusing on the past rather than on holding then accountable for their own actions.

“Well,” said Doan, “blaming anyone else for their own errors is an Obama administration’s stock in trade. They love to blame George Bush for all of their problems. The fact of the matter is there can be no comparison whatsoever. And, when you look at it, it’s one of those situations where there’s simply no way that you can excuse the kinds of excesses that went on. But the Obama administration is trying to do the best it can to divert attention. The good thing for Americans is that Congressman Darrell Issa who will be looking into these matters, he is far more interested in good government and cutting wasteful spending.”

Have a look at the interview, via Fox News: