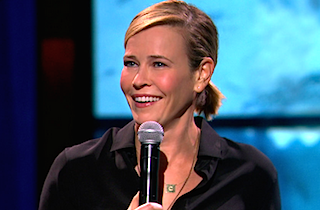 It was around this time last year that ABC announced it had poached The Rachel Maddow Show producer Bill Wolff away from MSNBC to take over the reins of The View. In the year since, things haven’t gone so smoothly for the daytime talk show, from Rosie O’Donnell’s sudden departure to the scuttling of short-lived co-hosts Nicolle Wallace and Rosie Perez.

Once again, Whoopi Goldberg is the last woman standing with a new cast of ladies by her side, including a returning Joy Behar. And then, on Monday, ABC announced that Wolff was “leaving” as well after just one season.

On Wednesday, The Hollywood Reporter reported that Wolff will be named executive producer and showrunner of comedian Chelsea Handler’s new talk show on Netflix, which was first announced more than a year ago but is not set to premiere until sometime next year.

“I could not be more thrilled to join Netflix and Chelsea Handler in transforming what we know to be the talk show,” Wolff said in a statement. “Viewers love Chelsea and her ability to go to a place and ask the questions no one else will. I can’t wait to work with these pioneers in the business to entertain and educate audiences around the world.”

Handler’s new show will be the first of its kind to stream on demand as opposed to airing at a specific time on television. She has said she plans to produce at least two episodes per week.