Former Marine On Gun Control: ‘In The Third Reich…No One Saw That Coming Until It Was Too Late’
video

Former Marine On Gun Control: ‘In The Third Reich…No One Saw That Coming Until It Was Too Late’ 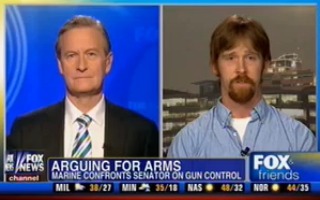 Joshua Boston, the Marine who is making viral waves because of his open letter to Senator Dianne Feinstein (D-CA) on his opposition to gun control, told Fox & Friends‘ Steve Doocy Monday that he’s worried about the government coming after guns because “it’s something we’ve seen happen time and time again in history.” It happened, Boston said, “with Stalin, it happened in Cambodia.” What does Boston find most concerning of all? That it happened, “of course,” in the “Third Reich.” No one “saw that coming until it was too late,” he said.

Doocy had Boston read a part of his letter which summarized his points. He wrote,

Senator Feinstein’s office wrote Boston back and noted that the legislation would be “carefully focused to protect the rights of existing gun owners by exempting hundreds of weapons used for hunting and sporting purposes.” Boston didn’t appreciate her response and said “this idea that the rights of existing gun owners is strictly limited to hunting and sporting purposes is absurd and has no basis in the Bill of Rights.”

Watch the full clip below, via Fox news: