Former MI Gov. Blasts Romney Who ‘Knifed Us In The Back’ For Taking Auto Rescue Credit
video

Former MI Gov. Blasts Romney Who ‘Knifed Us In The Back’ For Taking Auto Rescue Credit 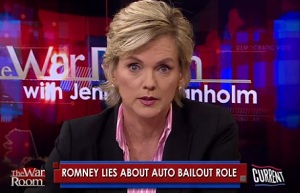 Former Massachusetts Governor and presumptive Republican nominee Mitt Romney touched off a firestorm of derision when he said he would “take a lot of credit” for the rescue of the auto industry, which he famously opposed. While much of the reaction has been a mixture of amazement and amusement, former Michigan Governor Jennifer Granholm, who was in office when Romney said “Let Detroit Go Bankrupt,” was decidedly not amused. On Tuesday night’s episode of Current TV’s The War Room, Granholm let Romney have it with both barrels.

“There are politics, there are lies, and then there’s you,” Gov. Granholm began. “You take it to a whole ‘nother level. OK, I admit that I have a particular animus toward you, as a guy that knifed us in the back when Michigan was on its knees, but you simply cannot be our president. It cannot happen.”

She went on to chastise Romney for abandoning the people in the auto industry of his home state, ” where your father and so many of your family members had worked,” and instead, “raised your finger into the air, saw which way the wind was blowing, and followed it.”

Romney’s “case” for taking credit relies on the fact that he wanted a managed bankruptcy, and that’s what ended up happening, but he absolutely opposed federal money being used to fund that bankruptcy, while everyone agrees there was no private investment available. Not even from Bain Capital, the firm that Romney once ran, and which still pays him millions a year. It would be like Gil Scott-Heron taking credit for the Apollo 11 mission just because he wrote a poem called “Whitey On The Moon.”

I disagree with Granholm on two points, though. I definitely don’t want Mitt Romney to stop talking. Without him, who do we got, Joe Biden? The occasional outburst from Ted Nugent? If the Obama administration rescued Detroit, Mitt Romney is single-handedly bailing out the political press with astonishing displays of sac like this.

Gov. Granholm also goes on to say that “It’s ironic that on a day in which we focus on the auto industry, we’re debating the merits of a guy who exhibits all the clichés we unfairly assign to used car salesmen.”