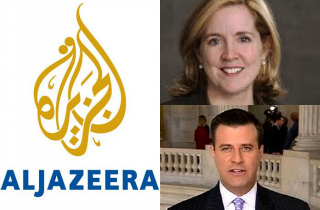 Among the hires announced by Al Jazeera America this week in anticipation of its expected launch next week is the moving of ABC News’s Senior Vice President into the fledgling network’s presidential chair. Additionally, former MSNBC anchor David Shuster will join the network’s talent roster.

More than 30 years ago Kate started at ABC News as a 20/20 intern, and her career has taken her from This Week with David Brinkley to World News and from London to Atlanta and around the world.

[…] While we will miss Kate’s insights, judgment and humor, we know that she is stepping into an important role and we wish her very best with this new challenge.

David Reiter and Jon Williams will continue to oversee domestic and foreign coverage.

We will let you know soon when plans are made to celebrate our dear friend.

In the meantime, please join me in thanking Kate for more than 30 years of contributions to ABC News. And let’s all congratulate Kate on her new presidency.