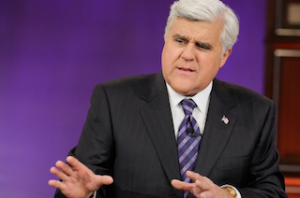 At the tail end of The Daily Beast’s in-depth look at Jay Leno‘s upcoming departure from the Tonight Show today, former NBC executive Don Ohlmeyer squashes the notion that the host is ready to hand the reins over to Jimmy Fallon. “Oh, bullshit,” Ohlmeyer told The Daily Beast’s Lloyd Grove. “I’m sure Jay says that to everybody who asks him, but for the Jay that I know, his heart has to be breaking about this.”

Ohlmeyer, who served as NBC’s west coast president in the late 1990’s, was responding to quotes from an unnamed TV executive who has spoken to Leno and said the host is “much more at peace with moving on” now than he was when the network prematurely moved him to 10pm to make room for Conan O’Brien before quickly reversing their decision. “He’s vanquished Dave for good. He’s vanquished Jimmy Kimmel,” the TV exec said. “He goes out on top even if the critics will never give him his due. He’s truly ready, come next February, to move on to his garage.”

Ohlmeyer’s sentiments are borne out by Leno’s jokes in recent months at NBC’s expense. “Instead of going out the way Johnny Carson went out,” Ohlmeyer said, Leno’s “going out having to make self-deprecating jokes about being fired. I will not be surprised if he pops up in some way in late-night television.” Rumors that Leno could be moving his late night show to Fox began swirling immediately after Fallon’s ascension became official.