Former NSA Head On Face The Nation: ‘In An Ideal World, I’d Keep All This Secret’
video

Former NSA Head On Face The Nation: ‘In An Ideal World, I’d Keep All This Secret’ 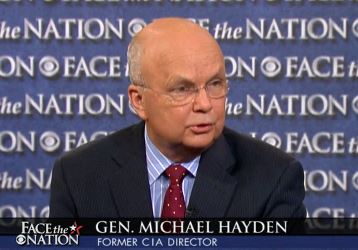 Michael Hayden, who previously served as the heads of both the CIA and NSA, sat down with CBS’ Bob Schieffer today to weigh in on the international manhunt for Edward Snowden and how much top-secret information he has released to the public about NSA surveillance. Hayden expressed confidence that if the NSA carefully releases more details about the scope and limit of the programs, people will feel more assured, but admitted to Schieffer that “in an ideal world, I’d keep all this secret.”

Schieffer brought up President Obama downplaying the urgency of bringing Snowden back to the United States. Hayden said it’s important to get Snowden, suggesting Obama is just trying to “limit diplomatic and perhaps even political damage.” He claimed the NSA leaks have done “severe and irreversible” damage to the intelligence community, especially the potential damage it could do to U.S. foreign relations when other countries start thinking that American intelligence can’t keep secrets.

Schieffer noted it’s been hard to get people from the government on for interviews, and asked if they should be doing more to “help the American people understand what’s happening here.” Hayden claimed that if the American people have more details about just what the NSA is doing, “the more comfortable they will feel.” However, he acknowledged this is not an ideal scenario.

“In an ideal world, I’d keep all this secret, because any of it that I make public slices some of my operational advantage away from me.”

Despite this, he said it would be smart at this point to “shave points off of my operational effectiveness” to make people feel more comfortable about these programs.