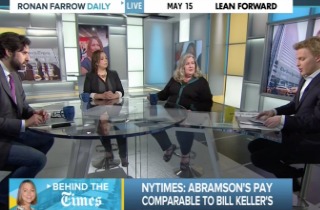 A panel of media professionals and reporters joined MSNBC host Ronan Farrow on Thursday to savage the New York Times over allegations that former Executive Editor Jill Abramson received less compensation than her male colleagues. One former Times reporter alleged that “endemic” sexism has raged at the paper since the 1980s and persists even today. She added that, even accounting other factors beyond rates of pay, the paper remains “unbelievably sexist.”

Former Times reporter Leslie Bennetts claimed she left the institution in 1988 specifically because of a dispute over gender-based pay discrimination. After noting that the paper’s “treatment of women was so atrocious,” she recalled discovering she was being paid less than her male colleagues for the same work and was blown off by her superiors when she complained about it.

Bennetts alleged that a sex discrimination lawyer told her that “salary discrimination is endemic at the New York Times. It is a bomb waiting to go off.”

“They pay lip service, they write editorials, Jill did a great job of increasing the amount of news about women and covering the issue,” Bennetts asserted. “But they don’t do it.”

“The fact is that, by a lot of our indexes, they’re still unbelievably sexist,” the former Times reporter declared. “If you look at the front page and experts quoted and recent study about women in the news media, the percentages are terrible and they haven’t changed in many, many years.”