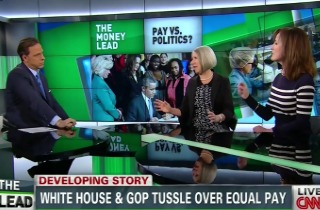 Anita Dunn, a veteran Democratic operative and a former White House communications director in Barack Obama‘s administration, did not perform all that well when tasked with defending the president’s election year push for a variety of remedies to the issue equal pay for women. To the extent that this an issue at all, which Dunn failed to prove, she also was unable to demonstrate that the White House’s proposed solutions would even address the issue without creating new, far more tangible problems for employers and employees alike in the process.

After CNN host Jake Tapper noted that it is already illegal under the National Labor Relations Act to punish one employee for disclosing what they make to another employee, Dunn sidestepped the issue by saying that it was nevertheless difficult to have those conversations with co-workers. She did not, however, outline how a presidential order would address the perennial problem of awkward conversations.

Not only did Dunn burst out of the gate by failing to comprehensively address Tapper’s question, she undermined the White House’s effort to create hostility between employer and employee when she said that compensation disparity most likely occurs without the employer even being aware of it.

Tapper noted that a recent study revealed that the White House, too, does not pay women on average as much as men. The Heritage Foundation’s The Foundry senior contributor, Genevieve Wood, observed that the White House’s defense is the same as the private sector’s — that the calculation which asserts that women make 77 cents for every dollar men make is flawed.

Wood added that this kind of flawed calculation might discourage young women from entering the workforce or asking their employer for the salary they deserve. “We ought to be celebrating where women are, not telling them that they’re down where they shouldn’t be,” Wood said.

Dunn made a vital counterpoint here, noting that Wood was correct about young women but incorrect about women of child-rearing age and older. But after this moment, the wheels fell off.

Wood noted that Dunn had diverged entirely from the subject at hand by shifting from equal pay to complete equality of employment along gender lines, and shifted the conversation back to equal pay. Wood then asserted, based on a Department of Labor study, equal pay already exists.

“According to the department of labor who did the study in 2009, if you compare job to job, experience to experience and you break the same experience to the table, they are making the same,” Wood said.

Finally, Wood and Dunn engaged in a rhetorical brawl over the need for the proposed Paycheck Fairness Act. Wood said that this legislation encourages employees, men and women, to sue their employers and discourages employers from giving raises or bonuses based on performance.

To counter this valid point, Dunn fired the last salvo in her arsenal. She began by accusing Wood of deviating from the issue at hand, a tactic that Dunn had, in fact, resorted to on multiple occasions throughout the interview. Finally, Dunn whimsically insisted that the Paycheck Fairness Act is nothing more than a toothless, unenforceable guideline designed encourage employers to not discriminate against women. Wood, admirably, did not let this misleading assertion stand.

Wood’s performance was forceful, and she routinely interrupted Dunn — a level of assertiveness for which the former White House official seemed unprepared. Furthermore, Wood’s command of the data surrounding employee compensation rates was strong but not reflective of years of research on the subject. Even so, Dunn was unable to counter most of her assertions. That could be due to the fact that her arguments are simply not that convincing.

When faced with even a cursory counterargument, the administration’s effort to reanimate the War on Women crumbles. In the absence of a Todd Akin-like figure to make their arguments for them, it is possible that the White House is simply ill-suited to mount a convincing claim that such a war even exists.