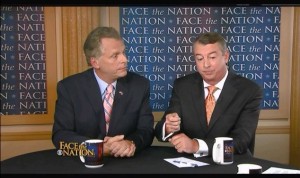 Ready for a trip down Memory Lane? Face the Nation held an interestingly anachronistic debate today on the Obama jobs program between former RNC chair Ed Gillespie and former DNC chair Terry McAuliffe, where the two quarreled over the optics of President Obama’s vacation and Congress’ obstinacy in passing a jobs bill. Host Norah O’Donnell led the discussion, wherein the two agreed the time for talk was over, but, predictably, differed on who exactly was doing the useless talking.

O’Donnell opened the discussion asking about the appropriateness of a vacation for the President at this time, given the economic situation. Gillespie took the first shot, noting that he didn’t “begrudge him” a vacation, since “I’m sure it’s exhausting, wrecking an economy as big as the United States’.” The jokes out of the way, Gillespie added on a serious note that he did see that the “optics aren’t great”– either of the vacation or the bus tour, which both have melded in some ways as a compound talking point– and that he couldn’t imagine the response Democrats would have had if President Bush had done the same.

McAuliffe actually didn’t go full on the attack with this point, instead arguing that the problem with the jobs situation wasn’t the President, but that America “needs legislation” and a Republican-dominated House wouldn’t write it. He then added that, in his new capacity as an executive at a green technology business, he knew what creating jobs was about, and he was “sick and tired of the political speeches,” later continuing to add that “the public is sick of it.”

Gillespie didn’t take his eye off the ball, however, attack President Obama for not doing enough to fix the economy, and arguing that President Bush had the longest period of successive job growth in modern history. “The President can complain about bad luck; the reality is it’s bad policy.” McAuliffe didn’t entirely argue against that, instead diverting the attention to Congress: “I wish the President and the Congress would’ve taken this up in January,” he admitted, but as that was not happening, he argued Congress was to blame for being devoted to taking down the President rather than fixing the economy.

Watching these two duke it out again is tremendous fun for anyone lamenting the lack of fireworks between Reince Preibus and Rep. Debbie Wasserman-Schultz— and we can only hope Michael Steele gets in on the action at some point.