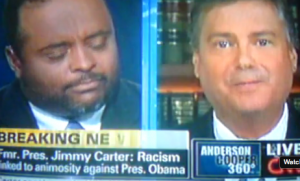 Even though we live in an era in which some people think it’s OK to interrupt the President of the United States on the House floor, we still have a strong political tradition of listening whenever former presidents have something to say. Which is why Former President Jimmy Carter made a big splash yesterday when he said that that criticism of Barack Obama shows that there is an “inherent feeling” in America that a black man should not be President. Whatever you think of Carter, he’s not just another pundit; there’s a big difference between Jimmy Carter saying that Obama’s critics are “racist” and Maureen Dowd saying the same thing. How did cablers respond?

Before we get into the spin cycle, check out Carter’s original interview. “I think an overwhelming portion of the intensely demonstrated animosity toward President Barack Obama is based on the fact that he is a black man.”

Keith Olbermann and Markos Moulitsas sounded off on Countdown; unsurprisingly, Moulitsas came down firmly on the side of the former president, though he said there were other factors at work. Moulitsas: “Clearly, this is not an issue of policy differences: they are very angry that there’s a black man in charge of this country.”

Sean Hannity responded by bringing out a big political gun of his own: former House Speaker Newt Gingrich. Gingrich: “If you’re on the hard left in the socialist wing of the Democratic party, you can’t believe that anyone can disagree with you, because it’s sort of a secular religion.” Carter’s a socialist now too!? With that point definitively settled, the conversation quickly turned to ACORN.

The wildcard, AC360, came across as pretty firmly siding with Carter, thanks largely to impassioned commentary by Roland S. Martin. Tea Party leader Mark Williams who had been shellacked on AC360 the night before for presenting a moderate face on TV while he blogged about how Obama was an “Indonesian Muslim” with the other hand, made another appearance, but he was outgunned.


As always, even the sound and fury of cable news is nothing compared to what you’ll see on the blogosphere. As in, if you read some of the comment threads on Freep about all of this, they will likely burn your eyes.