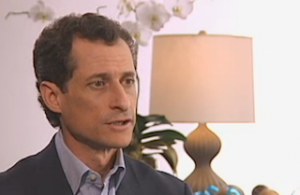 Following his lengthy and in-depth interview with The New York Times Magazine, former Rep. Anthony Weiner sat down for his first televised interview since resigning from Congress following a Twitter sexting scandal that dominated the media for much of June 2011. Weiner, who is actively pursuing the possibility of running in New York City’s upcoming mayoral race, told NY1 that he is “sorry” for his “dishonest” and “dishonorable” actions.

Since coming clean to the world about “inappropriate messages” and photos he sent to six different women over Twitter, Weiner says he has been “excruciatingly honest, in letter by letter, detail by detail, with my wife. And frankly, a lot of these things are in the public domain. An embarrassing amount is in the public domain.”

As for the mayoral run, Weiner said he is still testing the waters, but added, “I want to be part of the ideas primary. That’s for sure. That primary I want to do very well in.”

Watch video below, via NY1: