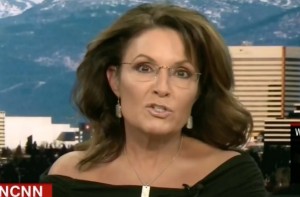 Current MSNBC talking head Nicolle Wallace used to make her living trying to fashion then-Governor Sarah Palin (R-AK) into something more than an anthropomorphic drool puddle during the 2008 presidential race, and now makes her living talking about failing at that. On Thursday morning’s Morning Joe, Wallace was discussing the foreign policy chops of Republican presidential nominee Donald Trump, and after agreeing with host Joe Scarborough that Palin was “woefully ignorant” on the subject, she asserted that Palin was better than Trump because she was at least willing to learn.

Wallace got a big laugh when she described Palin as going to bed every night “with an open highlighter smeared on her face” from trying to learn, but her prescription for Trump shows Wallace has learned nothing from the near-disaster she participated in:

He could read “The Looming Tower” and speak more eloquently about 9/11. You could read five books and speak with more nuance and respect.

Do you think Nicolle Wallace can actually hear the words that are coming out of her own mouth? She just got finished explaining how Sarah Palin was a foreign policy disaster even after cramming intensely on the subject, and then concludes that Trump could successfully mitigate his foreign policy deficits by reading five books. That doesn’t even qualify you as an expert on Harry Potter.

What Wallace is suggesting is not that Trump would actually become better at foreign policy, she’s suggesting placing another dangerously ignorant finger on the trigger through a more convincing hustle. If the only thing standing between Trump and the presidency is that he sounds like an idiot, we’re in big trouble, because there are a lot of people who like little words.