Fort Lee Mayor: Meeting with Christie ‘Productive’ and ‘I Accepted His Apology’
video

Fort Lee Mayor: Meeting with Christie ‘Productive’ and ‘I Accepted His Apology’ 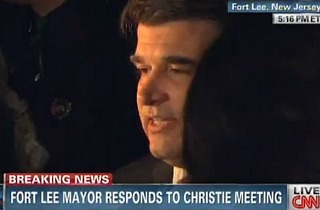 The mayor of Fort Lee, Mark Sokolich, appeared on the steps of his city hall on Thursday to inform the press on his impressions of Gov. Chris Christie’s press conference and the governor’s subsequent meeting with Fort Lee officials. He said that the meeting with the governor was “productive” and that he and his staff are “content at the moment.”

Sokolich said that there is more investigating that needs to be done into the circumstances that led to the closure of two lanes of the George Washington Bridge in September, 2013. “To a certain extent, we have to wait and see what else transpires,” he said.

“But from the governor’s office and its relationship with the borough of Fort Lee, we believe that today’s meeting went in a very productive course of action and we’re content at the moment,” Sokolich said.

“I accepted his apology,” the mayor continued. He explained that he did not maintain his earlier request that the governor not come to Fort Lee because Christie “insisted.” He said that his borough “would welcome any governor, especially our governor, with open arms.”

“I’m glad he came,” Sokolich added. He concluded by saying that he takes Christie “at his word” that the governor “had nothing to do” with the ostensibly vindictive reasoning behind lane closures on the bridge.