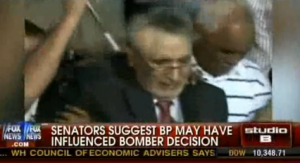 The dark story of British Petroleum and their many problems took a further disturbing turn yesterday when four Democratic senators from the states of New York and New Jersey accused the company of aiding in the release of convicted terrorist Abdelbaset al-Megrahi so that they could drill in Libya. Sens. Bob Menendez and Frank Lautenberg of New Jersey and Charles Schumer and Kirsten Gillibrand of New York are calling for BP to stop their drilling in Libya and testify in front of Congress on the issue. Menendez appeared on Studio B today to discuss this investigation into BP’s possible “blood money.”

al-Megrahi was convicted for the 1988 bombing of Pan Am Flight 103 which exploded over Lockerbie, Scotland, killing 270 people (189 of them Americans). He was released from prison last year after doctors diagnosed him as only having three months to live. Rumors have recently been surfacing that he actually could live for many years and now is living in the lap of luxury with the decision to release him based on oil. Smith explained that BP has admitted that they talked to the British government about getting al-Megrahi released more quickly but just for business relations with Libya. The senators want to investigate to see what exactly was BP’s involvement.

Menendez said this about the evidence so far:

“It seems to me that when you add the fact that the Libyans reached out to the doctors that made the determination that he only had three months to live- al-Megrahi, the Pan Am 103 bomber who was convicted and was in custody by the Scottish government. Now we hear those doctors saying that basically they were on the Libyan payroll. Ultimately now they say he can live 10 years. Then you look at BP’s written transactions with Jack Straw, the Secretary of Justice for the United Kingdom in which they said that the lack of a transfer of this individual could impede the deal that we are striking with the Libyans to drill oil off the Libyan coast. And then you see Jack Straw write to the Scottish government and basically say, y’know, we’re going to include this individual. At the end of the day, when you look at all of that, I think it is plenty- while it’s circumstantial, it is plenty of circumstantial evidence to raise the questions and to have the hearing and to ultimately get our State Department to pursue the British because, otherwise, we send the message to terrorists in the world that, even after you’re caught and convicted of a terrorist act, killing 189 Americans, 38 from my home state of New Jersey, that then you can live in the lap of luxury in Libya and be celebrated.”

Smith was in complete agreement.

Somewhere, in the BP public relations department, someone is sobbing. Meanwhile, the satirical BP PR on Twitter had some strong (and very crude, no pun intended) words on the subject.