Fox’s Bret Baier: If Problems With Obamacare Continue, ‘There Is Going to Have to Be a Delay’
video

Fox’s Bret Baier: If Problems With Obamacare Continue, ‘There Is Going to Have to Be a Delay’ 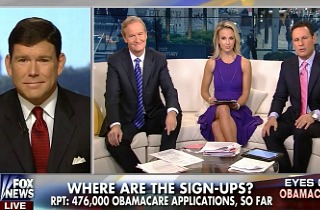 Fox News Channel anchor Bret Baier joined the hosts of Fox & Friends on Monday to preview President Barack Obama’s speech where he is expected to address the problems with the implementation of the Affordable Care Act. Baier said that the website’s problems can be fixed, but if they persist into December it is likely that “there is going to be a delay.”

“I think it will have to change,” Baier said of the tone that the administration had taken thus far when addressing the reported issues with the ACA’s implementation. “I think the president speaking today is part of that and they’re going to try to own some of this on the roll-out.”

“The director of OMB [Office of Management and Budget] said she can’t even guarantee it’s going to be fixed by mid-December,” Steve Doocy reported. “So, if the president is going to come out today like the head of customer relations, ‘Look, we’ve blown it and we’re sorry,’ that would be extraordinary because when was the last time this president has said we made a mistake?”

“I think it is going to be today,” Baier replied. “I do think if the administration fixes it quickly there is time, according to the experts, to make it work before January. But if it takes until December, there is going to have to be a delay I would bet.”

Brian Kilmeade said that he expects the president to partially blame Republicans for the roll-out’s problems. Baier added that he could see Obama making mention of the state exchanges which are run by the federal government versus the states which chose to implement aspects of the ACA including expanding the Medicaid rolls.