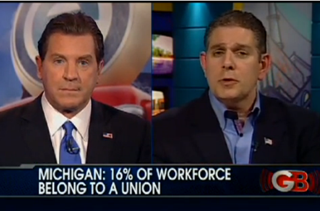 In the first half of the week subsequent to Glenn Beck‘s big goodbye announcement off, Judge Andrew Napolitano brought a lighter version of his libertarian FBN show Freedom Watch to the hour. For those wondering what the other possible flavor of 5PM could be, Follow the Money host Eric Bolling gave us a taste today with a fiery debate against Lansing, MI mayor Virg Bernero replete with Google references and accusations of supporting Chinese-style economics.

For those that have yet been exposed to Bolling on Fox Business or his Saturday morning economics programs, he’s not one to back down from a loud debate, and often prefers the more traditional cable news model of people with dramatically different political views digging deeply at each other (as opposed to the more recently-developed approach of guests with similar views reinforcing each other’s points calmly). Mayor Bernero, a union supporter who appeared to have little use for Wall Street or major government economic intrusion against labor, apparently was not afraid of sticking sharply to his points, either. Bernero, beginning the discussion highlighting the importance of collective bargaining rights, argued that the union right to collective bargaining was critical for the health of the Michigan economy. Bolling’s retort to that argument was, essentially, to ask what health of the Michigan economy? “Government workers have four times the benefits and almost double the salary” of their counterparts, Bolling argued, a claim that Bernero described as “not true at all” and, in fact, “when you compare apples to apples, it is indeed the same.”

“You’re misleading the public,” Bolling snapped back, repeating his prior numbers, which eventually got Bernero to abandon that line of attack and instead point out that “Lansing is struggling… because of the manufacturing that your buddies sent overseas.” Large corporations, Bernero claimed, “went overseas because they could make more money and because they lacked patriotism.” He then challenged Bolling to “Google” the claim that “when unions were at their strongest in the ’50s and ’60s, everyone else was doing better.” Bolling responded with a simple question: “are there unions in China?”

Ultimately the debate returned to the statistic that federal workers make almost twice as much as their analogs in the private sector, with both sides claiming the other’s statistic was false. It’s quite the lively debate, and gets to the core of the conservative problem with the union issue to begin with– the government competing as if it were a private corporation itself for the same pool of employees as proper businesses.