Fox’s Judge Napolitano: Unlike Ferguson, Eric Garner’s Killer Should Have Been Indicted 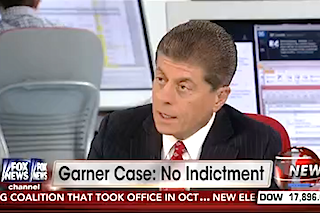 Immediately following the grand jury decision not to indict an NYPD officer in the chokehold death of Eric Garner, Fox News’ Shepard Smith invited legal analyst Judge Andrew Napolitano to share his opinion on the matter. Based on the cell phone video evidence, Napolitano quickly said the officer should have been indicted.

“My thoughts are that this ought to have been an indictment and ought to have been an indictment for some form of manslaughter,” Napolitano said. “It’s not first-degree murder, it’s not second-degree murder but it’s certainly reckless manslaughter, because of the excessive use of deadly force on a person who posed no serious or material threat to the police.”

Napolitano drew a stark distinction between the Garner case and that of Michael Brown, in which there was a “struggle for the gun.” Instead, he said, “This is a case of a poor, sorry individual doing nothing more than selling untaxed cigarettes and as a result of government intervention, he’s dead.”

While Napolitano said he generally agrees with the strategy of policing the “small stuff” like selling untaxed cigarettes in order to reduce more dangerous crimes, he added, “This is an example of it not working. This is an example of a cop using a procedure, which as you indicated the police department has instructed its police for 20 years, long before he was a cop, not to use, a procedure that was grossly excessive in light of the threat to the police at the scene, which was near zero.”